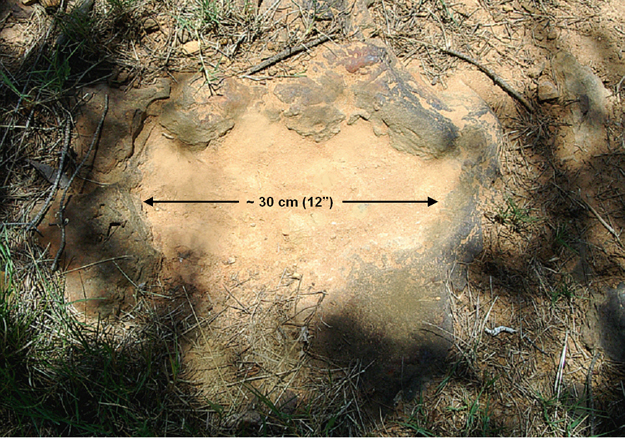 About 110 million light years away, the bright, barred spiral galaxy NGC 3259 was just forming stars in dark bands of dust and gas. Here on the part of the Earth where NASA's Goddard Space Flight Center would eventually be built, a plant-eating dinosaur sensed predators nearby and quickened its pace, leaving a deep imprint in the Cretaceous mud.

On Friday, Aug. 17, 2012, noted dinosaur hunter Ray Stanford shared the location of that footprint with Goddard's facility management and the Washington Post newspaper.

"This was a large, armored dinosaur," Stanford said. "Think of it as a four-footed tank. It was quite heavy, there's a quite a ridge or push-up here. ... Subsequently the sand was bound together by iron-oxide or hematite, so it gave us a nice preservation, almost like concrete."

This imprint shows the right rear foot of a nodosaur - a low-slung, spiny leaf-eater - apparently moving in haste as the heel did not fully settle in the cretaceous mud, according to dinosaur tracker Ray Stanford. It was found recently on NASA's Goddard Space Flight Center campus and is being preserved for study. Credit: Ray Stanford > Larger image Stanford, a "proud amateur dinosaur tracker" has had several papers published, including the discovery of a new species of nodosaur from a fossilized hatchling found near the University of Maryland in College Park. He previously confirmed the authenticity of this track with David Weishampel of Johns Hopkins University in Baltimore, author of the book "Dinosaurs of the East Coast."

He had material from the same Cretaceous-era sedimentary rock dated, with help from the US Geological Survey, to approximately 110- to 112-million years old, by analyzing pollen grains sealed in the stone. The Cretaceous Period ran between 145.5 and 65.5 million years ago, and was the last period of the Mesozoic Era.

NASA officials will next consult with the State of Maryland and paleontologists to form a plan for documenting and preserving the find, Binstock said.

He called the location of the find "poetic."

"Space scientists may walk along here, and they're walking exactly where this big, bungling heavy armored dinosaur walked, maybe 110 to 112-million years ago," Stanford said.