The Curiosity Rover has the most advanced scientific instrumentation ever used to study the surface of Mars, and weighing in at 1 ton, has the heaviest payload. The 7 minute descent through Mars' atmosphere relied on a complex landing sequence never before attempted. To withstand the rigors of space travel and descent, the onboard Ocean Optics spectrometers were modified to handle extreme temperature ranges, radiation, shock and vibration.

After 14 tense minutes of waiting (the amount of time it takes for a signal to reach NASA's mission control from Mars), NASA was able to confirm that Curiosity survived the descent intact. Shortly after, it beamed back the first pictures from the surface of the Gale Crater where it landed. Now, the work begins for the Ocean Optics spectrometers as the rover journeys to Mount Sharp, a 3 mile high mountain inside the crater, collecting data as it goes. 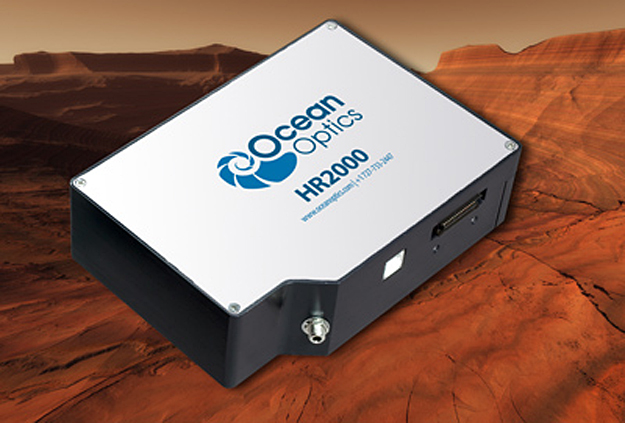 The three modular HR2000 high-resolution miniature fiber optic spectrometers will study Martian rock and soil composition using Laser Induced Breakdown Spectroscopy (LIBS). Each ChemCam spectrometer is configured to detect elemental signatures over a different wavelength of light: 240-336 nm, 380-470 nm, and 470-850 nm. The use of the three spectrometers simplifies the design and creates redundancy, as many elements under study have spectral lines in more than one of the spectral ranges covered by the three units.

Ocean Optics equipment has been used by NASA researchers for missions both on Earth and in space. A custom Ocean Optics spectrometer named ALICE was instrumental in detecting the presence of water ice on the moon during the LCROSS mission. The company's modular Jaz spectrometer scaled Mt. Everest with a team that included NASA astronaut Scott Parazynski to measure solar irradiance at extreme altitude.