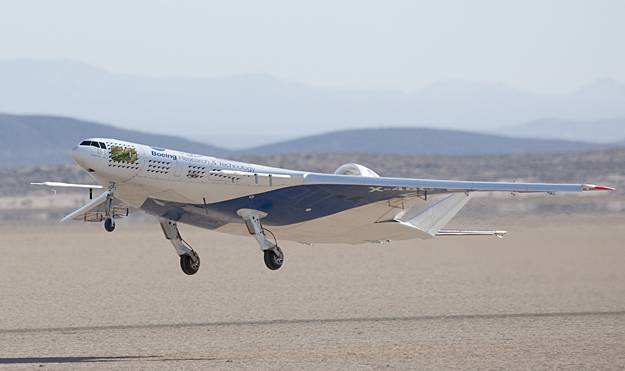 The aircraft, designed by The Boeing Co. and built by Cranfield Aerospace Limited of the United Kingdom, is flying again in partnership with NASA. The new X-48C model, which was formerly the X-48B Blended Wing Body aircraft, was modified to evaluate the low-speed stability and control of a low-noise version of a notional, future Hybrid Wing Body (HWB) aircraft design. The HWB design stems from concept studies being conducted by NASA's Environmentally Responsible Aviation project of future potential aircraft designs 20 years from now.

"We are thrilled to get back in the air to start collecting data in this low-noise configuration," said Heather Maliska, X-48C project manager at NASA's Dryden Flight Research Center. "Our dedicated team has worked hard to get the X-48C off the ground for its first flight and we are excited learning about the stability and control characteristics of this low-noise configuration of the blended wing body."

Primary changes to the C model from the B model, which flew 92 flights at Dryden between 2007 and 2010, were geared to transforming it to an airframe noise-shielding configuration. External modifications included relocating the wingtip winglets inboard next to the engines, effectively turning them into twin tails. The aft deck of the aircraft was extended about 2 feet to the rear. Finally, the project team replaced the X-48B's three 50-pound thrust jet engines with two 89-pound thrust engines.

"We are very pleased to begin flight tests of the X-48C," said Mike Kisska, Boeing X-48C project manager. "Working with NASA, we've successfully passed another milestone in our work to explore and validate the aerodynamic characteristics and efficiencies of the blended wing body concept." Additionally, the upc oming flight experiments with the X-48C will help researchers further develop methods to validate the design's aerodynamics and control laws, including a goal of reducing aerodynamic drag through engine yaw control tests.

During the planned second block of flight testing this fall, NASA will test engine yaw control software incorporated in the X-48C's flight computer. This research will use asymmetric engine thrust to create yaw, or nose left or right movements, for trim and for relatively slow maneuvers. NASA's Aeronautics Research Mission Directorate and Boeing are funding the X-48 technology demonstration research effort, which supports NASA's goals of reduced fuel burn, emissions and noise.

The X-48C retains most dimensions of the B model, with a wingspan just longer than 20 feet, and a weight of about 500 pounds. The aircraft has an estimated top speed of about 140 mph, and a maximum altitude of 10,000 feet.

The Air Force Research Laboratory, Dayton, Ohio, also is a member of the project team.