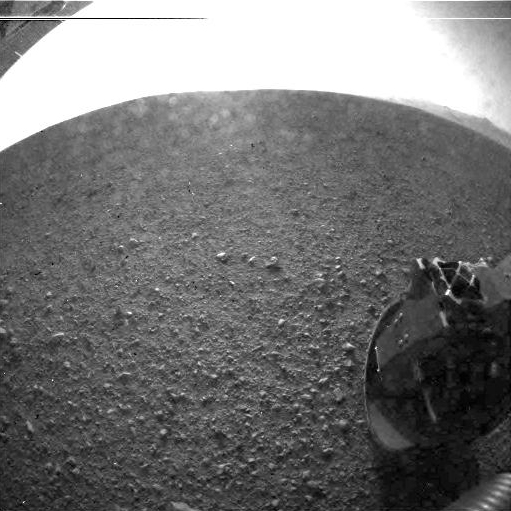 About two hours after landing on Mars and beaming back its first image, NASA's Curiosity rover transmitted a higher-resolution image of its new Martian home, Gale Crater. Mission Control at NASA's Jet Propulsion Laboratory in Pasadena, Calif., received the image, taken by one of the vehicle's lower-fidelity, black-and-white Hazard Avoidance Cameras - or Hazcams.

The black-and-white, 512 by 512 pixel image, taken by Curiosity's rear-left Hazcam, can be found at: http://www.nasa.gov/mission_pages/msl/multimedia/msl5.html .

"Curiosity's landing site is beginning to come into focus," said John Grotzinger, project manager of NASA's Mars Science Laboratory mission, at the California Institute of Technology in Pasadena. "In the image, we are looking to the northwest. What you see on the horizon is the rim of Gale Crater. In the foreground, you can see a gravel field. The question is, where does this gravel come from? It is the first of what will be many scientific questions to come from our new home on Mars."

While the image is twice as big in pixel size as the first images beamed down from the rover, they are only half the size of full-resolution Hazcam images. During future mission operations, these images will be used by the mission's navigators and rover drivers to help plan the vehicle's next drive. Other cameras aboard Curiosity, with color capability and much higher resolution, are expected to be sent back to Earth over the next several days.

Curiosity landed at 10:32 p.m. Aug. 5, PDT, (1:32 a.m. EDT, Aug. 6) near the foot of a mountain three miles (about five kilometers) tall inside Gale Crater, 96 miles (nearly 155 kilometers) 7in diameter. During a nearly two-year prime mission, the rover will investigate whether the region has ever offered conditions favorable for microbial life, including the chemical ingredients for life.

The mission is managed by JPL for NASA's Science Mission Directorate in Washington. The rover was designed, developed and assembled at JPL, a division of Caltech.

For more information on the mission, visit: http://www.nasa.gov/mars and http://marsprogram.jpl.nasa.gov/msl .