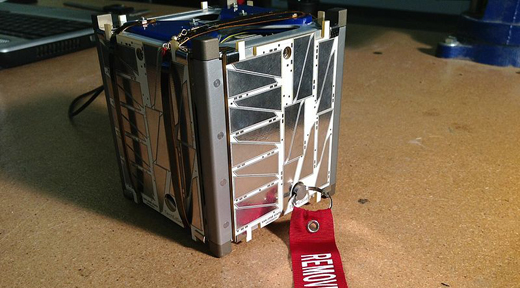 MOFFETT FIELD, Calif. - Engineers and student interns at NASA's Ames Research Center, Moffett Field, Calif., are gearing up to support and witness what may be the most thrilling ride a nanosatellite has ever taken. This October, for the first time, a small cubesat - a satellite weighing less than two pounds, housed in a 10 cm cube - will be one of five to jettison into orbit around Earth from the International Space Station.

The pioneering satellite, dubbed TechEdSat, is a collaboration among Ames; San Jose State University; the Swedish National Space Board (SNSB) via AAC Microtec, Uppsala, Sweden; and the Japan Aerospace Exploration Agency (JAXA). TechEdSat is set to launch to the space station along with other experiments and essential supplies in the "Kounotori 3" H-II Transfer Vehicle (HTV-3) at 7:06 p.m. PDT Friday, July 20, 2012, from the Tanegashima Space Center in southern Japan.

Once the HTV-3 reaches the space station, Expedition 32 Flight Engineers Joe Acaba of NASA and Aki Hoshide of JAXA use Canadarm2, the station's Canadian Space Agency provided robotic arm, to grapple the vehicle and berth it to a docking port on the Earthfacing side of the Harmony node. From there, TechEdSat will begin its four-week journey in space with a helpful nudge from the newly developed Japanese Exploration Module-Small Satellite Orbital Deployer.

"TechEdSat will evaluate the plug-and-play technologies, like avionics designed by commercial providers, and will allow a group of very talented aerospace engineering students from San Jose State University to experience a spaceflight project from formulation through decommission of a small spacecraft," said Andres Martinez, program manager for Small Spacecraft Payloads and Technologies at Ames.

Engineers are eager for the satellite's departure and will be able to watch a real-time video feed from the space station to get a bird's eye view. After it is out of sight, engineers will listen for the satellite's heartbeat signal from a ground station at San Jose State University. TechEdSat is another example of how the International Space Station is being put to use as an integral part of technology development for the NASA and the nation.

The TechEdSat project is a trailblazing mission that showcases how a collaboration among NASA, academia and industry can set the standard for future cubesat endeavors," said Periklis Papadopoulos, TechEdSat co-investigator, professor and Aerospace EngineeringGraduate Studies Program Director at San Jose State University. "This has been a life-changing experience for the students - they were faced with real challenges they had to address through hard work and innovation on a tight deliverable timeline. NASA provided the facilities, knowhow, framework, and mentorship every step of the way and guided the students' focus to ensure mission success."

The TechEdSat will transmit a heartbeat packet over amateur radio every 60 seconds. The structure of these packets is documented on the TechEdSat Wiki page. Amateur radio operators around the world are aware of the TechEdSat project and will be able track, download and share this information.

"This mission represents an excellent classroom case study where the students notonly are instructed in the design, build and flight of advanced 'space qualified' systems, but also are introduced to NASA engineering safety requirements and procedures that are critical to mission success, especially in cases where the system has to be processed and deployed through the space station," added Papadopoulos.

TechEdSat is a project funded by NASA Ames with additional funds from NASA's Edison SmallSat Program within NASA's Space Technology Program. Engineers kept the total hardware costs per unit to less than $30,000 by strictly using commercial off-the-shelf hardware and keeping the design and mission objectives as simple as possible.