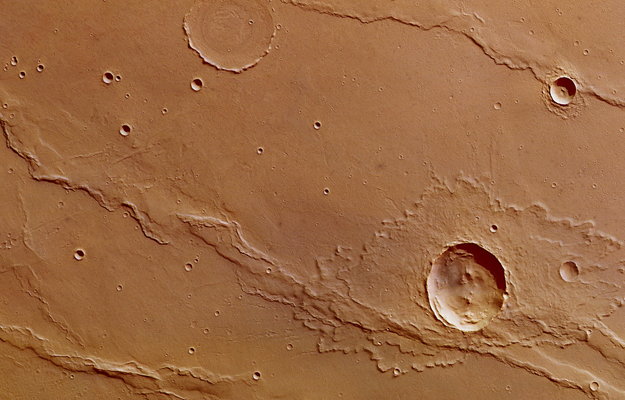 ESA's Mars Express has imaged an area to the south of the famed Valles Marineris canyon on the Red Planet, showing a wide range of tectonic and impact features.

On 17 April, the orbiter pointed its high-resolution stereo camera at the Melas Dorsa region of Mars. This area sits in the volcanic highlands of Mars between Sinai and Thaumasia Plana, 250 km south of Melas Chasma. Melas Chasma itself is part of the Valles Marineris rift system.

The image captures wrinkle ridges, some unusual intersecting faults and an elliptical crater surrounded by ejecta in the shape of a butterfly and with a strange 'fluid-like' appearance.

Elliptical craters like this 16 km-wide example are formed when asteroids or comets strike the surface of the planet at a shallow angle.

Scientists have suggested that a fluidized ejecta pattern indicates the presence of subsurface ice which melted during the impact. Subsequent impacts have created a number of smaller craters in the ejecta blanket.

The rim of another large crater is visible in the upper center part of the image, but it appears mostly to have been almost buried during some distant epoch by volcanic dust and ash.

This makes any detailed study of it almost impossible. However, its center shows concentric deposits that could provide insights into the composition of the volcanic material that buried it.

Several wrinkle ridges can be seen across the image. These form when horizontal compression forces in the crust pushes the crust upwards.

To the left, the ridges are bisected by crustal displacement faults. These have cut into the ridges and the surrounding surface at some later epoch. This highlights the different tectonic phases responsible the formation of this region.