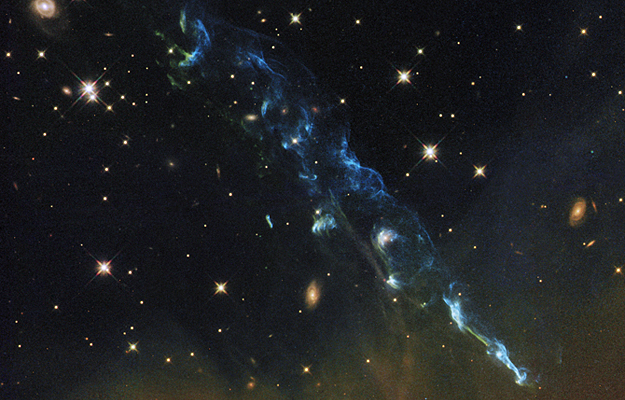 Resembling a Fourth of July skyrocket, Herbig-Haro 110 is a geyser of hot gas from a newborn star that splashes up against and ricochets off the dense core of a cloud of molecular hydrogen. Although the plumes of gas look like whiffs of smoke, they are actually billions of times less dense than the smoke from a July 4 firework. This Hubble Space Telescope photo shows the integrated light from plumes, which are light-years across.

Herbig-Haro (HH) objects come in a wide array of shapes, but the basic configuration stays the same. Twin jets of heated gas, ejected in opposite directions away from a forming star, stream through interstellar space. Astronomers suspect that these outflows are fueled by gas accreting onto a young star surrounded by a disk of dust and gas. The disk is the "fuel tank," the star is the gravitational engine, and the jets are the exhaust.

When these energetic jets slam into colder gas, the collision plays out like a traffic jam on the interstate. Gas within the shock front slows to a crawl, but more gas continues to pile up as the jet keeps slamming into the shock from behind. Temperatures climb sharply, and this curving, flared region starts to glow. These "bow shocks" are so named because they resemble the waves that form at the front of a boat.

In the case of the single HH 110 jet, astronomers observe a spectacular and unusual permutation on this basic model. Careful study has repeatedly failed to find the source star driving HH 110, and there may be good reason for this: perhaps the HH 110 outflow is itself generated by another jet.

Astronomers now believe that the nearby HH 270 jet grazes an immovable obstacle -- a much denser, colder cloud core -- and gets diverted off at about a 60-degree angle. The jet goes dark and then reemerges, having reinvented itself as HH 110.

The jet shows that these energetic flows are like the erratic outbursts from a Roman candle. As fast-moving blobs of gas catch up and collide with slower blobs, new shocks arise along the jet's interior. The light emitted from excited gas in these hot blue ridges marks the boundaries of these interior collisions. By measuring the current velocity and positions of different blobs and hot ridges along the chain within the jet, astronomers can effectively "rewind" the outflow, extrapolating the blobs back to the moment when they were emitted. This technique can be used to gain insight into the source star's history of mass accretion.

This image is a composite of data taken with Hubble's Advanced Camera for Surveys in 2004 and 2005 and the Wide Field Camera 3 in April 2011.