Hubble observes a dwarf galaxy with a bright nebula 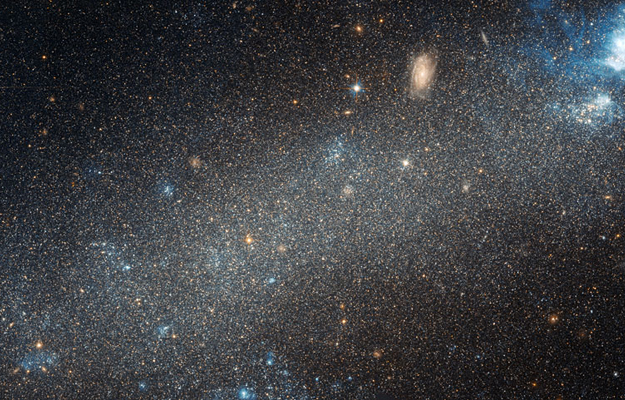 The starry mist streaking across this image obtained by the NASA/ESA Hubble Space Telescope is the central part of the dwarf galaxy known as NGC 2366. The most obvious feature in this galaxy is a large nebula visible in the upper-right part of the image, an object listed just a few entries prior in the New General Catalogue as NGC 2363.

A nearby yellowish swirl is not in fact part of the nebula. It is a spiral galaxy much further away, whose light is shining right through NGC 2366. This is possible because galaxies are not solid objects. While we see the stars because they shine brightly, galaxies are overwhelmingly made up of the empty space between them. Hubble's high-resolution image illustrates this perfectly: the stars are small points of light surrounded by the darkness of space.

The splendid interconnected objects of NGC 2366 and NGC 2363 are located about 10 million light-years away in the constellation of Camelopardalis (the Giraffe). As a dwarf galaxy, NGC 2366's size is in the same ballpark as the two main satellite galaxies of our Milky Way, named the Large and Small Magellanic Clouds. Like the Magellanic clouds, NGC 2366's lack of well-defined structure leads astronomers to further classify it as an irregular galaxy.

Although NGC 2366 might be small by the standards of galaxies, many of its stars are not, and the galaxy is home to numerous gigantic blue stars. The blue dots scattered throughout the galaxy speak to the burst of star formation that the galaxy has undergone in recent cosmic time. A new generation of these stellar titans has lit up the nebula NGC 2363.

In gas-rich star-forming regions, the ultraviolet radiation from young, big, blue stars excites the hydrogen gas, making it glow. NGC 2363, as well as other, smaller patches seen throughout Hubble's image, serve as the latest formation sites for stellar giants.

Imaged through green and infrared filters, these nebulae take on a blueish tinge in this image, though the actual colour is a shade of red.

This image was produced from two adjacent fields observed by Hubble's Advanced Camera for Surveys. The field of view is approximately 5.5 arcminutes across, which is equivalent to a little over a fifth of the diameter of the full Moon. Although this is comparatively large by the standard of Hubble's images, NGC 2366 is much too faint to observe with the naked eye.