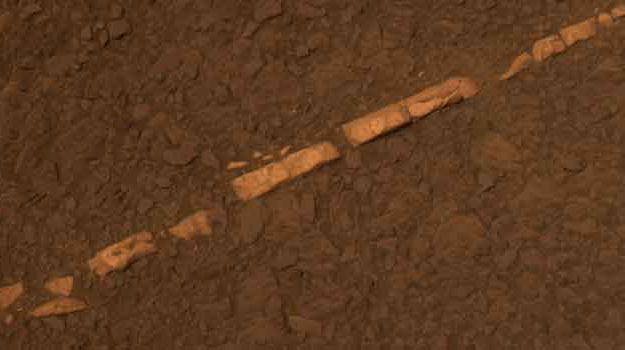 A report in the May 4 edition of the journal Science details discoveries Opportunity made in its first four months at the rim of Endeavour Crater, including key findings reported at a geophysics conference in late 2011.

Opportunity completed its original three-month mission on Mars eight years ago. It reached Endeavour last summer, three years after the rover's science team chose Endeavour as a long-term destination. This crater is about 4 billion years old and 14 miles (22 kilometers) in diameter.

The impact that excavated the crater left a jumble of fused-together rock fragments around the rim. In a chunk brought to the surface by a later, much smaller impact into the rim, Opportunity found evidence that the original impact released heated, underground water that deposited zinc in that rock. Later after the impact, cool water flowed through cracks in the ground near the edge of the crater and deposited veins of the mineral gypsum.

"These bright mineral veins are different from anything seen previously on Mars, and they tell a clear story of water flowing through cracks in the rocks," said Steve Squyres of Cornell University, Ithaca, N.Y. He is the principal investigator for Opportunity and lead author of the new report by 27 researchers. "From landing until just before reaching the Endeavour rim, Opportunity was driving over sandstone made of sulfate grains that had been deposited by water and later blown around by the wind. These gypsum veins tell us about water that flowed through the rocks at this exact spot. It's the strongest evidence for water that we've ever seen with Opportunity."

For the past four months, the solar-powered rover has been working at one outcrop on the Endeavour rim, called Greeley Haven. Reduced daylight during the Martian winter, and accumulated dust on the rover's solar array, have kept energy too low for driving.

"The days are now growing longer, and the sun is moving higher in the sky at Endeavour Crater. We expect Opportunity to resume driving in the next two months and continue exploring other parts of the crater's rim," said Mars Exploration Rover Project Manager John Callas of NASA's Jet Propulsion Laboratory, Pasadena, Calif.

Researchers hope to get Opportunity to one of the deposits of clay minerals that have been detected in Endeavour's rim by observations from orbit. These minerals could be evidence of a non-acidic wet phase of the region's environmental history.

"Exploring Endeavour Crater is like having a new landing site," said JPL's Timothy Parker, a co-author of the new report. "That's not just because of the difference in the geology here compared to what we saw during most of the first eight years, but also because there's a whole vista before us inviting much more exploration."

Opportunity and its rover twin, Spirit, completed their three-month prime missions on Mars in April 2004. Both rovers continued for years of bonus, extended missions. Both have made important discoveries about wet environments on ancient Mars that may have been favorable for supporting microbial life. Spirit stopped communicating in 2010.

Landing successfully is quite a challenge, and the Mars Science Laboratory/Curiosity mission pioneers a new landing method to enable use of a heavier rover. Curiosity is about twice as long and more than five times as heavy as any previous Mars rover. Its size and mass accommodate a science payload designed to study whether the landing region has had environmental conditions favorable for supporting microbial life, including chemical ingredients for life.

JPL, a division of the California Institute of Technology in Pasadena, manages the Mars Exploration Rover Project and Mars Science Laboratory Project for the NASA Science Mission Directorate, Washington. More information about Opportunity is online at http://www.nasa.gov/rovers and http://marsrovers.jpl.nasa.gov . You can follow the project on Twitter at http://twitter.com/MarsRovers and on Facebook at http://www.facebook.com/marsrovers .