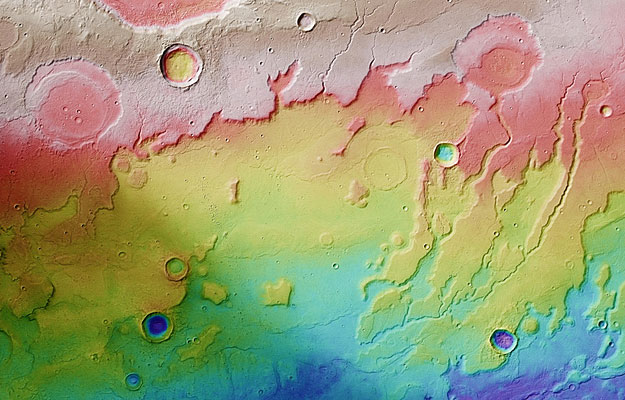 ESA's Mars Express has returned images of a region on the Red Planet that appears to have been sculpted in part by flowing liquid. This again adds to the growing evidence that Mars had large volumes of water on its surface in the distant past.

On 21 June last year, Mars Express pointed its high-resolution stereo camera at the western part of Acidalia Planitia, a gigantic basin in the planet's northern lowlands, at the interface with Tempe Terra, an older, higher terrain.

Acidalia Planitia is a region so vast that it can be seen from Earth by amateur astronomers.

The famous observer Giovanni Schiaparelli named this large dark feature on his map of Mars after the mythical Acidalian (or Venusian) fountain in Boeotia, where the three graces of ancient Greek myth bathed.

The images taken cover part of the western edge of the region, where some of the numerous valleys descending from Tempe Terra show subtle evidence for 'dendritic' drainage patterns emanating from them.

The word dendritic comes from the Greek for tree and the channels in the images are believed to have been formed by the surface run-off of flowing water from rain or melting snow during some distant martian epoch.

The presence of deep valleys, with very few tributaries in the form of smaller valleys further downstream, shows that the region itself probably formed by a process called 'sapping' or 'undermining', which occurs when erosion along the base of a cliff wears away softer layers of material.