Fireball Over California/Nevada: How Big Was It? 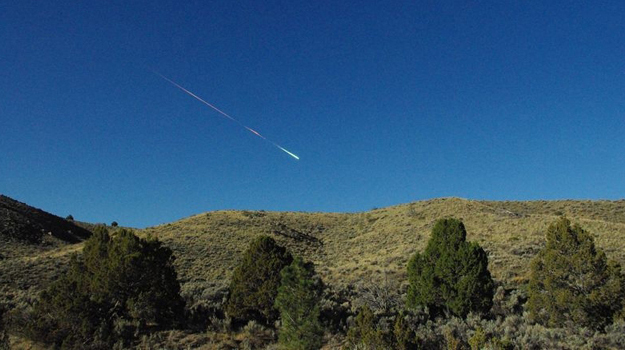 A meteor in the sky above Reno, Nevada on April 22, 2012. Image credit: Lisa Warren Larger image

A bright ball of light traveling east to west was seen over the skies of central/northern California Sunday morning, April 22. The former space rock-turned-flaming-meteor entered Earth's atmosphere around 8 a.m. PDT. Reports of the fireball have come in from as far north as Sacramento, Calif. and as far east as North Las Vegas, Nev.

Bill Cooke of the Meteoroid Environments Office at NASA's Marshall Space Flight Center in Huntsville, Ala., estimates the object was about the size of a minivan, weighed in at around 154,300 pounds (70 metric tons) and at the time of disintegration released energy equivalent to a 5-kiloton explosion.

"Most meteors you see in the night's sky are the size of tiny stones or even grains of sand and their trail lasts all of a second or two," said Don Yeomans of NASA's Near-Earth Object Program Office at the Jet Propulsion Laboratory in Pasadena, Calif. "Fireballs you can see relatively easily in the daytime and are many times that size - anywhere from a baseball-sized object to something as big as a minivan."

Elizabeth Silber of the Meteor Group at the Western University of Canada, Ontario, estimates the location of its explosion in the upper atmosphere above California's Central Valley.

Eyewitnesses of this fireball join a relatively exclusive club. "An event of this size might happen about once a year," said Yeomans. "But most of them occur over the ocean or an uninhabited area, so getting to see one is something special."

NASA detects, tracks and characterizes asteroids and comets passing close to Earth using both ground- and space-based telescopes. The Near-Earth Object Observations Program, commonly called "Spaceguard," discovers these objects, characterizes a subset of them, and establishes their orbits to determine if any could be potentially hazardous to our planet. JPL manages the Near-Earth Object Program Office for NASA's Science Mission Directorate in Washington. JPL is a division of the California Institute of Technology in Pasadena.

More information about asteroids and near-Earth objects is at:
http://www.jpl.nasa.gov/asteroidwatch.