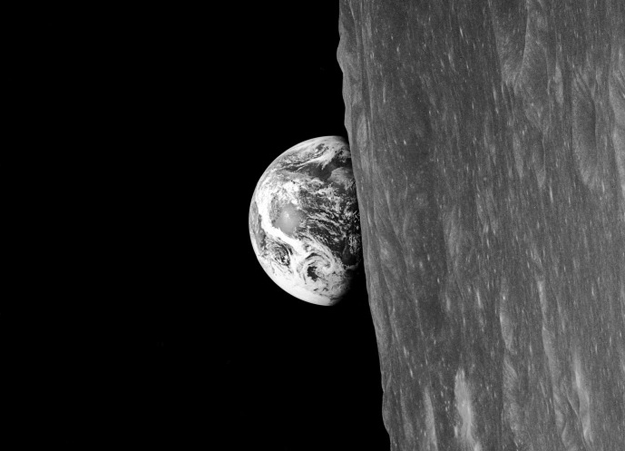 Earthrise in black and white is presented with the horizon oriented vertically because that is how the astronauts described seeing it. Credit: NASA Larger image

Everyone can see an Earthrise in this new NASA visualization, which draws on richly detailed maps of the moon's surface made from data gathered by NASA's Lunar Reconnaissance Orbiter.

Imagine yourself in orbit, your spacecraft flying backward with its small window facing down toward the surface of the moon. You peer out, scouring the ash-colored contours of the cratered landscape for traces of ancient volcanic activity. Around you, the silent, velvety blackness of space stretches out in every direction.

The spacecraft rolls over, and you glimpse a sliver of intense light starting to climb over the rough horizon. It might be dawn, except that the bright sliver quickly morphs into an arc of dazzling white swirled with vivid blue and then rises far enough to be recognized as the brilliant, marbled Earth. Captured on film, this breathtaking view becomes the iconic photograph "Earthrise."

On December 24, 1968, three people saw this happen firsthand: Apollo 8 Commander Frank Borman and crew members William A. Anders and James A. Lovell, Jr. Now, in honor of Earth Day 2012, the rest of us can see what that was like in a new NASA visualization, which draws on richly detailed maps of the moon's surface made from data gathered by NASA's Lunar Reconnaissance Orbiter (LRO).

"This visualization recreates for everyone the wondrous experience of seeing Earth from that privileged viewpoint," says LRO Project Scientist Rich Vondrak of NASA's Goddard Space Flight Center in Greenbelt, Md.

At the time of the famous photo, Apollo 8 was rounding the moon for the fourth time, traveling in a nearly circular orbit about 110 kilometers (68 miles) above the moon's surface at about a mile per second. "The spacecraft was pointed down to look at the moon's surface, because Anders was conducting an extensive photographic survey," explains James Rice, an astrogeologist at Goddard. "But Lovell needed to perform a navigation sighting, so Borman rolled the spacecraft." That's when Earth abruptly appeared.

To recreate this scene, NASA animator Ernie Wright reconstructed the orbit in software, using coordinates from an Apollo 8 mission report and photographs taken by the crew. "Apollo 8 was at 11 degrees south latitude and between 118 and 114 east longitude, with a westward view," says Wright. "The floor of Pasteur crater is visible in the foreground of the photograph."

Wright rendered the crisp contours of the moonscape using high-resolution topography data from LRO's Lunar Orbiter Laser Altimeter, which has provided the most precise and complete maps to date of the moon's complex, heavily cratered terrain.

The Earth shown in the visualization is not an exact duplication of what the astronauts saw but a mosaic of more recent images taken by the Moderate Resolution Imaging Spectroradiometer (known as MODIS) instrument on the Terra satellite and assembled by NASA's Visible Earth team.

The narration in the visualization comes from the original audio recording of the Apollo 8 astronauts, their commentary on the task at hand interrupted as they react to the sudden sighting of Earth. "Oh my God!" an astronaut calls out. "Look at that picture over there!"

A black-and-white image is snapped with one of the Hasselblad cameras on board, capturing the very first picture of Earth taken by a human in orbit around the moon. The crew then scrambles to get a color picture, which is taken 58 seconds after the black-and-white photo.

The color image, which simultaneously captures Earth's bold vitality and its fragility, is later named "Earthrise" and has been reproduced countless times, including a U.S. postage stamp issued on May 5, 1969. This popularity earned the photo the featured spot on the cover of Life's book "100 Photographs that Changed the World," in which wilderness photographer Galen Rowell deemed it "the most influential environmental photograph ever taken."

LRO and LOLA were built and are managed by NASA Goddard. The research was funded by NASA's Science Mission Directorate in Washington, D.C. The visualizations were created at Goddard's Scientific Visualization Studio.

For more information on LRO and the Lunar Orbiter Laser Altimeter, visit: http://lunar.gsfc.nasa.gov