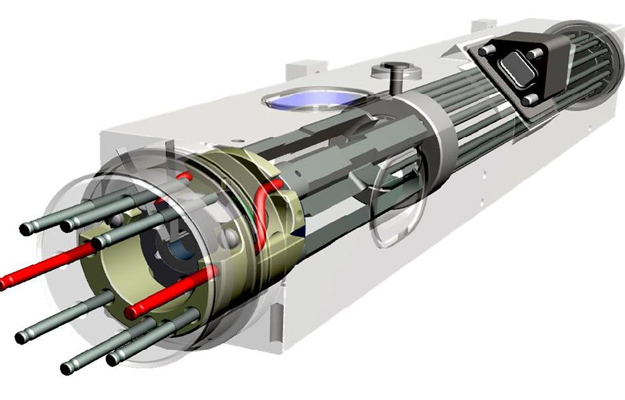 When people think of space technologies, many think of high-tech solar panels, complex and powerful propulsion systems or sophisticated, electronic guidance systems. Another critical piece of spaceflight technology, however, is an ultra stable, highly accurate device for timing - essential to NASA's success on deep-space exploration missions.

NASA is preparing to fly a Deep Space Atomic Clock, or DSAC, demonstration that will revolutionize the way we conduct deep-space navigation by enabling a spacecraft to calculate its own timing and navigation data in real time. This one-way navigation technology would improve upon the current two-way system in which information is sent to Earth, requiring a ground team to calculate timing and navigation and then transmitting it back to the spacecraft. A real-time, on-board navigation capability is key to improving NASA's capabilities for executing time critical events, such as a planetary landing or planetary "fly-by," when signal delays are too great for the ground to interact with the spacecraft during the event.

"Adopting DSAC on future NASA missions will increase navigation and radio science data quantity by two to three times, improve data quality by up to 10 times and reduce mission costs by shifting toward a more flexible and extensible one-way radio navigation architecture," said Todd Ely, principal investigator of the Deep Space Atomic Clock Technology Demonstration at NASA's Jet Propulsion Laboratory in Pasadena, Calif. The project is part of NASA's Technology Demonstration Missions program, managed by the Marshall Space Flight Center in Huntsville, Ala., for NASA's Office of the Chief Technologist in Washington.

The one-way deep space navigation enabled by DSAC uses the existing deep space network more efficiently than the current two-way system, thus expanding the network's capacity without adding any new antennas or their associated costs. This is important, since future human exploration of deep space will demand more tracking from the deep space network than can currently be delivered with the existing system.

"The Deep Space Atomic Clock flight demonstration mission will advance this laboratory-qualified technology to flight readiness and will make a practical atomic clock available to a variety of space missions," Ely said.

The clock is a miniature mercury-ion atomic device the DSAC team will fly as a payload on an Earth orbiter in a one-year experiment to validate its operability in space and its usefulness for one-way navigation.

"A potential use for DSAC on a future mission would be in a follow-up to the Mars Reconnaissance Orbiter," Ely said. NASA's Mars Reconnaissance Orbiter launched to Mars in 2005 on a search for evidence that water existed on the planet's surface for enough time to provide a habitat for life. The orbiter completed its primary science phase in 2008 and continues to work in an extended mission. Atomic clocks are the most accurate timekeeping method known and are used as the primary standard for international time distribution services -- to control the frequency of television broadcasts, and in global navigation satellite systems such as the Global Positioning System.

Ground-based atomic clocks have long been the cornerstone of most space vehicle navigation because they provide root data necessary for precise positioning. DSAC will deliver the same stability and accuracy for spacecraft exploring the solar system. In much the same way that modern Global Positioning Systems, or GPS, use one-way signals to enable terrestrial navigation services, the Deep Space Atomic Clock will provide a similar capability in deep-space navigation -- with such extreme accuracy that researchers will be required to carefully account for the effects of relativity, or the relative motion of an observer and an observed object, as impacted by gravity, space and time. Clocks in GPS-based satellite, for example, must be corrected to account for this effect, or their navigational fixes begin to drift.

In the laboratory setting, the Deep Space Atomic Clock's precision has been refined to permit drift of no more than one nanosecond in 10 days, due to the work of NASA engineers at the Jet Propulsion Laboratory. Over the past 20 years, they have been steadily improving and miniaturizing the mercury-ion trap atomic clock, preparing it to operate in the harsh environment of deep space.