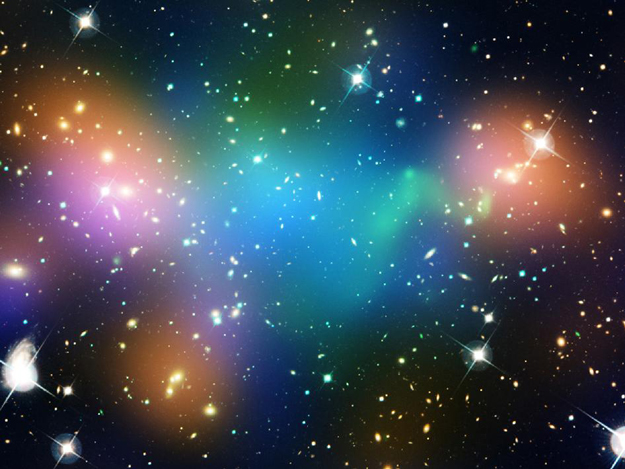 Five years ago, San Francisco State researcher Andisheh Mahdavi and his colleagues observed an unexpected dark core at the center of Abell 520, a cosmic "train wreck" of galaxy clusters. With new space-based telescope observations, they have confirmed that the core really does exist. But they are no closer to explaining why it is there.

When galaxy clusters crash into each other, the bright matter of galaxies sticks together with the mysterious substance called dark matter, leaving behind hot gases. Or at least that is what astronomers have observed in similar cosmic wrecks like the Bullet Cluster. But Myungkook James Jee of the University of California, Davis, Mahdavi and their colleagues say Abell 520 has a definite -- but bewildering -- dark matter core that is completely separated from its usual bright partners.

"We tried to come up with models that would explain this, but there were not any good models," said Mahdavi, an assistant professor in the Department of Physics and Astronomy. "There is no way that you could have cold dark matter piling up like this in a region with so few galaxies."

The researchers first identified the dark core in 2007 using a technique called gravitational lensing. Even though the dark core isn't visible, astronomers can get an idea of its location and size by observing how light from galaxies behind it is distorted by the core's gravitational pull.

"We cannot see dark matter because it does not radiate. What we see is the 'effect' of dark matter," Jee explained. "It's similar to how we cannot see wind directly, but we can tell the presence of wind by looking at the vibration of leaves on a tree."

In this case, the galaxies behind the dark core are the tree leaves. But the 2007 observations came in part from ground-based telescopes, which can detect only a few of the galaxies lurking behind Abell 520. The Earth's atmosphere also distorts the view from the ground, "like looking at a tree inside a house through a frosty window," Jee said.

The researchers decided that they needed further observations from the space-based Hubble Telescope to confirm the dark core's presence. "For every ten galaxies that we were able to see from the ground, we can see 100 from space with the Hubble," they noted, "for a total of about 4000 galaxies from space versus 400 from the ground."

The 2007 study was "a result that basically everyone wished would go away," Mahdavi said, but the new observations published in the Astrophysical Journal show "without a doubt that there is a dark matter concentration in that piece of the sky."

Their results do not put the mystery to rest, however, since the researchers also note in their study that there are no plausible scenarios yet to explain the existence of the dark core. In all other known collisions, bright galaxy matter and dark matter stay together.

Why is Abell 520 so different? It may be that our understanding of how galaxies grow and collide is incomplete, Mahdavi suggests. Alternatively, a new theory of dark matter interaction could be necessary to explain the mysterious core.

Mahdavi thinks that the first scenario is more likely, and that perhaps there are "some sort of freak initial conditions that would create this amount of dark matter."

"But the only way we understand how galaxies grow up is with supercomputer simulations," he noted. The simulations--which would include recreating galaxy cluster collisions under a variety of conditions -- help to calculate how likely it would be to spot an oddball like Abell 520. "My colleagues tell me the likelihood is nil, but now we have the responsibility to go and do the hard work to check the simulations," he said.

If the simulations don't turn up anything to show that Abell 520 is possible, Mahdavi said the mystery might be best left in the hands of particle physicists to revisit their theories about the nature and interactions of dark matter.

"I'm just as perplexed as I was back in 2007," he said. "It's a pretty disturbing observation to have out there.