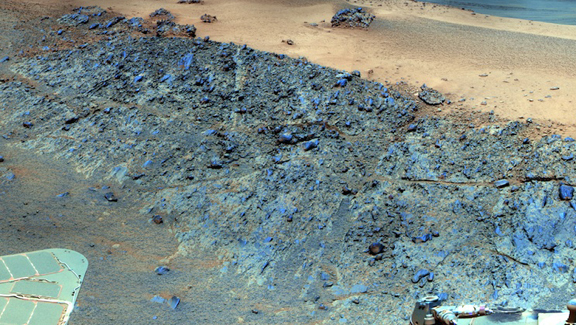 NASA's Mars Exploration Rover Opportunity will spend the next few months during the coldest part of Martian winter at Greeley Haven, an outcrop of rock on Mars recently named informally to honor ASU Regents' Professor Ronald Greeley, a planetary geology who died Oct. 27, 2011.

Long passionate about exploring the solar system and Mars in particular, Greeley was involved with many missions to the Red Planet, including Mariners 6, 7, and 9, Viking, Mars Pathfinder, Mars Global Surveyor, and the two Mars Exploration Rovers. He was also a co-investigator for the camera system on the European Space Agency's Mars Express orbiter mission. Among his major research interests were wind erosion, dunes and dust devil activity, all of which can be found in abundance on Mars.

"We miss Ron's wisdom and guidance on the rover team," says Jim Bell, lead scientist for the Panoramic Camera (Pancam) on the rover. Bell, who came to ASU in early 2011, is a professor in the School of Earth and Space Exploration, part of the College of Liberal Arts and Sciences.

"We hope that eventually the International Astronomical Union will name a crater or some other feature on Mars or some other solar system body for Ron," Bell says. "But that process typically takes years."

In the meantime, he adds, "This small commemoration helps preserve the memory of Ron's contributions to planetary science within the community and beyond."

Opportunity, which landed on Mars eight years ago, has driven a total of 21 miles (34 kilometers). In August, Opportunity arrived at the rim of Endeavour Crater, an ancient impact scar 14 miles (22 km) wide. Eroded sections of the crater's rim poke above the flat-lying sediments that Opportunity has driven on since it landed.

Located just south of Mars' equator, the rover has worked through four Martian southern hemisphere winters. Being closer to the equator than its twin rover, Spirit, Opportunity has not needed to stay on a Sun-facing slope during previous winters. Now, however, its solar panels carry a thicker coating of dust than before.

The dust makes it necessary for Opportunity to spend the winter at a Sun-facing site where the rover can tilt its power panels northward about 15 degrees for maximum solar exposure. Greeley Haven provides just the right tilt.

In addition, while Opportunity remains on the slope over winter, it still has some mobility and can investigate Greeley Haven's multiple targets of scientific interest using with the tools on the rover's robotic arm.

Windows into the past

Although they are much eroded, the uplifted segments of Endeavour's rim contain rocks that date back much farther into Martian history than any Opportunity has yet examined.

"Endeavour Crater has given us a whole new mission," remarked Steven Squyres, chief scientist for the Mars Exploration Rover project, describing the prospects for science after Opportunity reached the rim.

Plans for research over the winter at Greeley Haven include a radio-science investigation of the interior of Mars, inspections of mineral compositions and textures on the outcrop, and recording a full-circle, color panorama.

"Greeley Haven provides the proper tilt, as well as a rich variety of potential targets for imaging and compositional and mineralogic studies," Bell says. "We've already found hints of gypsum in the bedrock in this formation, and we know from orbital data that there are clays nearby, too."

Greeley Haven, he says, "looks to be a safe and special place that could yield exciting new discoveries about the watery past of Mars."