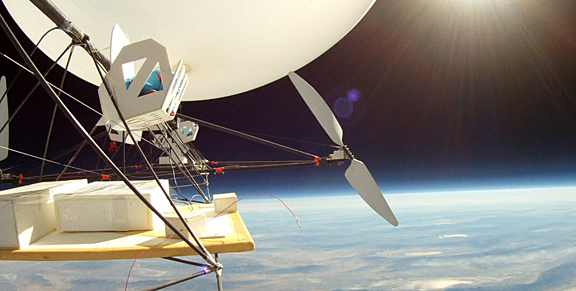 On Saturday morning, October 22, 2011, The Tandem airship was launched from Nevada's Black Rock desert. The airship flew to 95,085 feet, higher than any airship in history.

After fighting through extreme turbulence from 40,000 to 60,000 feet, Tandem soared to 95,085 feet. Tandem flew nearly four miles higher than any airship before. The pilot on the ground then remotely turned on the motors and flew the airship through a series of maneuvers. At the end of its mission one balloon burst and the command was sent to release the other balloon. Tandem was then carried to a soft landing by a row of five parachutes.

Tandem is an unmanned twin balloon airship. The two balloons are separated by a thirty foot long carbon fiber truss. Two electric motors each spin a six foot long propeller. The propellers are specifically designed to work in the thin atmosphere twenty miles up.

The airship was built and flown by the all-volunteer, independent space program: JP Aerospace. 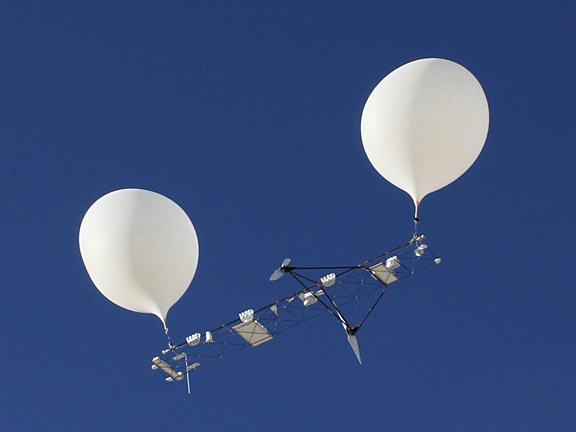 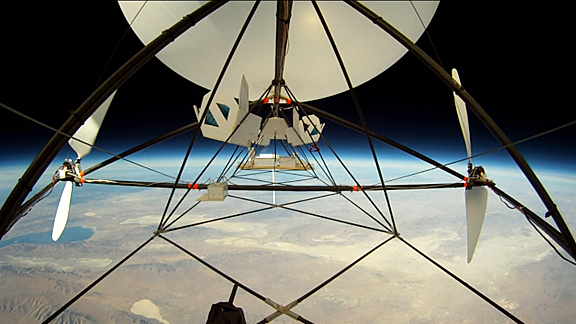 "The big aerospace firms have been trying to do this for decades, spending hundreds of millions of dollars," says John Powell, President of JP Aerospace. "We've spent about $30,000 and the past five years developing Tandem."

Tandem is a general workhorse vehicle. A high-altitude backhoe, it will be used as a launch platform for small research rockets, a mother ship for hypersonic test airships and all around tool for the Airship to Orbit program. Airship to Orbit is a project to build large V-shaped airships that will fly to space.

Tandem is also a construction vehicle for high altitude research stations and eventually cities at the edge of space.