Opportunity on Verge of New Discovery 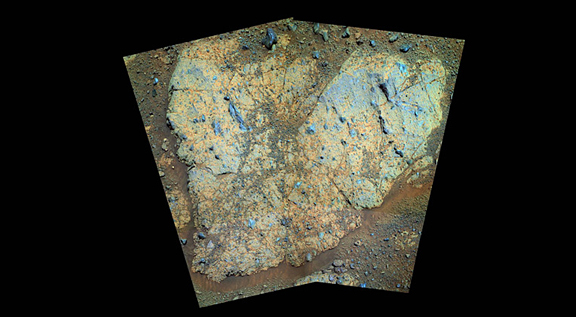 Shortly after Labor Day 2011, the Mars rover Opportunity was poised on the rim of the 22,000-meter-wide Endeavour Crater, preparing to sample a novel rock type. Much older than the sedimentary samples the rover's "tasted" so far, this new sample is flush with the promise of revealing clues to the planet's environment when running rivers coursed the surface.

What was supposed to have been a 90- to 180-day exploration of two distinct regions of the red planet has turned into a saga that has become one of science's most compelling and long-lasting adventures (now into its eighth year), enthralling the public and the science communities alike.

Launched the summer of 2003 and landing in January 2004, the solar-powered Mars Exploration Rovers (MER) Spirit and Opportunity completed their intended basic missions in April 2004. Each continued roving until March 2010, when Spirit, mired in unexpected but scientifically interesting Martian sand and pointed in an unfavorable direction to survive the winter dark, gave up the ghost.

Opportunity, on the other hand, remains active, having reached the rim of Endeavour Crater Aug. 9, 2011, knocking at the door of geology different from any it has explored during its first seven-plus years on Mars.

"Opportunity now is in a brand new mission," says Raymond E. Arvidson, PhD, the James S. McDonnell Distinguished University Professor in Arts & Sciences at WUSTL, and MER deputy principal investigator. "In late August, we looked at a rock named Tisdale, with a composition unlike any we've seen before. It has an enormous amount of zinc, bromine, phosphorus, chlorine, and sulfur, all elements that are mobile in the presence of water.

"The ancient rim of Endeavour represents a period when there was probably a lot more water on the surface," Arvidson says. "So, we're trying to get the chemical, mineralogical and geological setting to 'back out' those ancient conditions to reconstruct environmental conditions during this earlier time period."

The conditions that formed the sandstones Opportunity has sampled over the past seven years represent a kind of drying-out period of Mars. Occasionally wet but usually dry and wind-blown, the sulphur-rich mineral grains formed vast dune fields that were cemented into sandstone over millions of years by occasional seeping groundwater.

But the terrain Opportunity now is sampling -- largely buried by lake bed sediments -- pops up in places like Endeavour rim and is much older, going back to the earliest days of the planet. That's some 3.5 to 4 billion years ago in the last stages of heavy bombardment, when Mars was sweeping up the last planetesimals -- cosmic dust grains that collided and stuck to each other to form larger bodies. Endeavour is an impact crater produced during that heavy bombardment period.

Arvidson and his WUSTL colleagues also are part of the Compact Imaging Spectrometer for Mars (CRISM) team of the Mars Reconnaissance Orbiter, a craft orbiting Mars with sophisticated instrumentation that helps Arvidson and other NASA scientists determine where Opportunity should try to go next. The CRISM instrument provides spectral information on Martian rocks at a super-high resolution that is processed and analyzed at WUSTL.

CRISM spectral data and other orbital data on the part of the Endeavour crater rim named Cape York indicated a good possibility that clay minerals would be found there.

"Clays form in more neutral, less acidic conditions than the sulfate-rich sandstones we've been looking at," Arvidson says. "Our hypothesis is that if there are clay minerals, the water was less acidic and therefore more conducive to life. The presence of zinc, bromine, phosphorus, chlorine, and sulfur in the Tisdale rock is exciting in that it points toward water moving through and altering the rock, although we have no evidence for clay minerals in Tisdale. Further, the Tisdale surfaces were very rough and we were unable to make use of the Rock Abrasion Tool (RAT) to clean off the surfaces to expose fresh materials.

"Thus, we moved on and are now in the thick of the hunt to find these elusive clay minerals by traversing to other rock targets and making detailed measurements, including making chemical and mineralogical observations of natural, brushed, and ground surfaces. The rock Opportunity is sitting over currently is called Chester Lake and will be our first target in which we will use the RAT to progressively expose deeper and deeper surfaces," Arvidson says.

The key Opportunity instrument to verify the presence of what Arvidson thinks are iron-bearing clays is the Moessbauer spectrometer. This instrument measures the abundance of iron-bearing minerals in Martian rocks and soil by probing tiny changes in the energy levels of the iron atomic nucleus in response to its environment. The Moessbauer spectrometer illuminates a rock with a radioactive source of gamma rays tuned to the energy levels in the iron nucleus and then uses the energies of the returning gamma rays to determine the abundance of iron-bearing minerals in the surface rocks.

Because Opportunity's arm cannot move side to side due to a broken actuator, Arvidson and team members drive the vehicle to a spot where the arm can still place the RAT and in-situ instruments onto the surface.

Opportunity's mast-mounted emission spectrometer is no longer working, and the steering on one of the wheels is rotated in a bit. But Arvidson says the engineering and science teams have met every challenge through diligence and guarded optimism.

"Opportunity is just a really well-made vehicle," Arvidson says. "It's way, way beyond warranty. It was supposed to drive about 600 meters and so far it's gone 33,500 meters in round numbers, and has taken maybe 150,000 pictures by now.

"It's well-made and has a dedicated team that has eked out every ounce of science that we can get from it. Plus, we've been lucky and landed on a terrain that has rocks that contain detailed clues on past environmental conditions," he says.

"Stay tuned, we have a new mission and expect to make yet more exciting discoveries about the red planet."