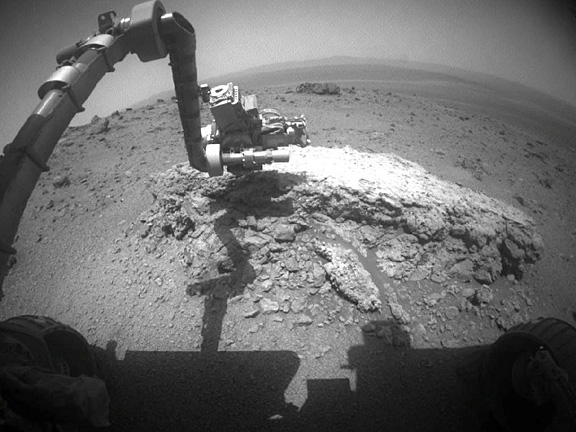 The initial work of NASA's Mars rover Opportunity at its new location on Mars shows surface compositional differences from anything the robot has studied in its first 7.5 years of exploration.

Opportunity arrived three weeks ago at the rim of a 14-mile-wide (22-kilometer-wide) crater named Endeavour. The first rock it examined is flat-topped and about the size of a footstool. It was apparently excavated by an impact that dug a crater the size of a tennis court into the crater's rim. The rock was informally named "Tisdale 2."

"This is different from any rock ever seen on Mars," said Steve Squyres, principal investigator for Opportunity at Cornell University in Ithaca, N.Y. "It has a composition similar to some volcanic rocks, but there's much more zinc and bromine than we've typically seen. We are getting confirmation that reaching Endeavour really has given us the equivalent of a second landing site for Opportunity."

The diversity of fragments in Tisdale 2 could be a prelude to other minerals Opportunity might find at Endeavour. In the past two weeks, researchers have used an instrument on the rover's robotic arm to identify elements at several spots on Tisdale 2. Scientists have also examined the rock using the rover's microscopic imager and multiple filters of its panoramic camera.

Observations by Mars orbiters suggest that rock exposures on Endeavour's rim date from early in Martian history and include clay minerals that form in less-acidic wet conditions, possibly more favorable for life. Discontinuous ridges are all that remains of the ancient crater's rim. The ridge at the section of the rim where Opportunity arrived is named "Cape York." A gap between Cape York and the next rim fragment to the south is called "Botany Bay."

"On the final traverses to Cape York, we saw ragged outcrops at Botany Bay unlike anything Opportunity has seen so far, and a bench around the edge of Cape York looks like sedimentary rock that's been cut and filled with veins of material possibly delivered by water," said Ray Arvidson, the rover's deputy principal investigator at Washington University in St. Louis. "We made an explicit decision to examine ancient rocks of Cape York first."

The science team selected Endeavour as Opportunity's long-term destination after the rover climbed out of Victoria crater three years ago this week. The mission spent two years studying Victoria, which is about one twenty-fifth as wide as Endeavour. Layers of bedrock exposed at Victoria and other locations Opportunity has visited share a sulfate-rich composition linked to an ancient era when acidic water was present. Opportunity drove about 13 miles (21 kilometers) from Victoria to reach Endeavour. It has driven 20.8 miles (33.5 kilometers) since landing on Mars.

"We have a very senior rover in good health for having already worked 30 times longer than planned," said John Callas, project manager for Opportunity at NASA's Jet Propulsion Laboratory in Pasadena, Calif. "However, at any time, we could lose a critical component on an essential rover system, and the mission would be over. Or, we might still be using this rover's capabilities beneficially for years. There are miles of exciting geology to explore at Endeavour crater."

Opportunity and its rover twin, Spirit, completed three-month prime missions in April 2004 and continued working for years of extended missions. Both have made important discoveries about wet environments on ancient Mars that may have been favorable for supporting microbial life. Spirit ended communications in March 2010.

"This is like having a brand new landing site for our veteran rover," said Dave Lavery, program executive for NASA's Mars Exploration Rovers at NASA Headquarters in Washington. "It is a remarkable bonus that comes from being able to rove on Mars with well-built hardware that lasts."

NASA will launch its next-generation Mars rover, Curiosity, between Nov. 25 and Dec. 18, 2011. It will land on Mars in August 2012. JPL, a division of the California Institute of Technology in Pasadena, manages the Mars Exploration Rover Project for NASA's Science Mission Directorate in Washington.

For more about Opportunity, visit http://www.nasa.gov/rovers and http://marsrovers.jpl.nasa.gov . You can also follow the mission on Twitter at: http://www.twitter.com/marsrovers .