The shape-shifting southern vortex of Venus 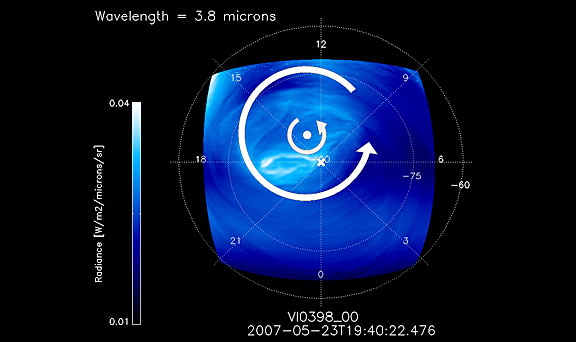 New analysis of images taken by ESA's Venus Express orbiter has revealed surprising details about the remarkable, shape-shifting collar of clouds that swirls around the planet's South Pole. This fast-moving feature is all the more surprising since its centre of rotation is typically offset from the geographical pole. The results of this study are published online in Science Express today.

Several planets in the Solar System, including Earth, have been found to possess hurricane-like polar vortices, where clouds and winds rotate rapidly around the poles. Some of these take on strange shapes, such as the hexagonal structure on Saturn, but none of them are as variable or unstable as the southern polar vortex on Venus.

Scientists have known about the presence of swirling clouds around the poles of Venus since they were first imaged by Mariner 10 in 1974. At the same time, it was discovered that Venus' upper winds sweep westwards around the planet in only four days, 60 times faster than the rotation of the solid surface of the planet - a phenomenon known as superrotation.

Thermal infrared imagery from the Pioneer Venus spacecraft subsequently revealed an enormous depression in the cloud blanket at the North Pole. This relatively warm polar 'hole' was thought to be caused by downward movement of gases, rather like water flowing down a drain. However, detailed examination of the thick clouds and dense atmosphere over the South Pole had to wait until the arrival of Venus Express in April 2006.

During its first orbit around the planet, multi-wavelength observations confirmed for the first time the presence of a huge 'double-eye' atmospheric vortex at the planet's South Pole. Some 2000 km across, it was comparable to the structure that had previously been detected at the North Pole.

Since then, high-resolution infrared measurements obtained by the Visible and Infrared Thermal Imaging Spectrometer (VIRTIS) instrument on Venus Express have revealed that the southern vortex is far more complex than previously believed. The VIRTIS images, taken at wavelengths of 3.8 and 5.0 microns, are ideal for tracking polar features on both the day and night sides of the planet, probing the polar cloud layer at an altitude of about 65 km.

The new observations, reported this week in the journal Science on the Science Express website, show that the vortex has a highly variable shape and internal structure. Images show that its morphology is constantly changing on timescales of less than 24 hours, as a result of differential rotation.

"The southern vortex is very dynamic compared with a hurricane on Earth, which remains stable for several days," said Hakan Svedhem, ESA's Venus Express Project Scientist. "It can take almost any shape, so although it often looks like an 'S' or figure 8, it may become completely irregular, even chaotic, in appearance."

The rapid shape changes indicate complex weather patterns, which are strongly influenced by the fact that the centre of the vortex does not coincide with the geographical pole.

The VIRTIS images show that the speeds of the zonal (east-west) winds change rapidly with latitude, revealing that the vortex is continually being pulled and stretched by wind shear. Although the mean zonal wind is retrograde (blowing from east to west) and approximately uniform equatorward of 84*S, its speed decreases toward the pole and becomes prograde (blowing from west to east) close to 87*S. A slightly slower wind is detected at 75*S, coinciding with the poleward edge of the cloud collar which coincides with a region of colder air surrounding the centre of the vortex.

The new analysis also reveals that the centre of rotation of the vortex drifts right around the pole over a period of 5-10 Earth days. Its average displacement from the geographical South Pole is about three degrees of latitude, or several hundred kilometres. The data show no evidence of any link between the positions of these 'centroids' and local solar times, as might result from a solar tide-related forcing of the superrotation.

"Our results highlight the importance of the polar region in the global dynamics of the Venus atmosphere," said David Luz of the Centre for Astronomy and Astrophysics at the University of Lisbon, Portugal, the lead author of the Science paper. "They provide new insights into the complex processes that shape the polar vortices and their role in the atmosphere's superrotation."

The Venus Express mission is currently funded until 2014, offering further opportunities for in-depth studies of the super-rotating atmosphere and the shape-shifting southern polar vortex. However, its highly elliptical orbit means that Venus Express flies too close to the planet's North Pole for detailed imaging studies of its other polar vortex.

"It seems likely that the northern polar vortex has a similar structure and behaves in a similar way," noted Svedhem. "However, the spacecraft flies very close to the North Pole, so it can only see a small region. Confirmation of the behaviour of the northern vortex will have to wait until future missions."

"Results such as these show how interesting Venus is to study and how important it is to study other worlds," Svedhem added. "They enable us to compare the processes that take place on Venus, a planet with a thick atmosphere, with those on our Earth."

The results of this study are published online in Science Express on 7 April 2011. Other authors of the paper were: by D.L. Berry of the University of Evora, Portugal; G. Piccioni and R. Politi of INAF-IASF Rome, Italy; P. Drossart and S. Erard from Observatoire de Paris, France; C.F. Wilson of Oxford University, United Kingdom; and F. Nuccilli from INAF-IFSI Rome, Italy.