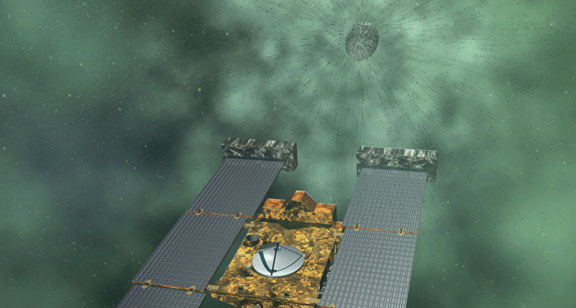 Mission controllers at NASA's Jet Propulsion Laboratory, Pasadena, Calif., watched as data downlinked from the Stardust spacecraft indicated it completed its closest approach with comet Tempel 1. An hour after closest approach, the spacecraft turned to point its large, high-gain antenna at Earth. It is expected that images of the comet's nucleus collected during the flyby will be received on Earth starting at about midnight California time (3 a.m. EST on Tuesday, Feb. 15).

Preliminary data already transmitted from the spacecraft indicate the time of closest approach was about 8:39 p.m. PST (11:39 p.m. EST), at a distance of 181 kilometers (112 miles) from Tempel 1.

This is a bonus mission for the comet chaser, which previously flew past comet Wild 2 and returned samples from its coma to Earth. During this bonus encounter, the plan called for the spacecraft to take images of the comet's surface to observe what changes occurred since a NASA spacecraft last visited. (NASA's Deep Impact spacecraft executed an encounter with Tempel 1 in July 2005).