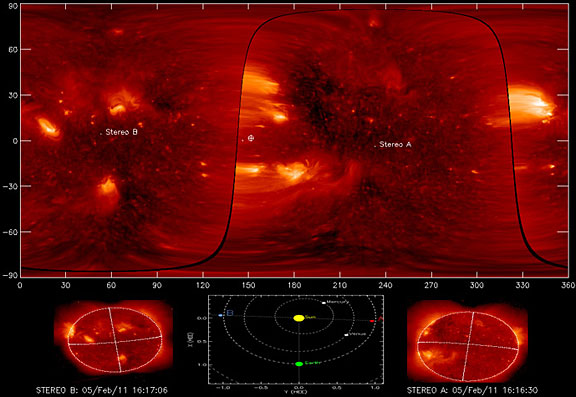 Beginning on February 6, 2011, the two STEREO spacecraft are 180 degrees apart providing Naval Research Laboratory scientists with a 360-degree view of the Sun. NASA's STEREO (Solar Terrestrial Relations Observatory) spacecraft were launched on October 25, 2006, and have been gathering spectacular images of solar activity, especially solar storms, since the mission began.

A key component of the STEREO mission is NRL's Sun Earth Connection Coronal and Heliospheric Investigation (SECCHI), a suite of five scientific telescopes that observe the solar corona and inner heliosphere from the surface of the Sun to the orbit of Earth. These unique observations are made in "stereo" by the two nearly identical solar-powered STEREO observatories with one observatory ahead of Earth in its orbit and the other trailing behind. The two observatories trace the flow of energy and matter from the Sun to Earth. The instruments aboard STEREO reveal the three-dimensional structure of coronal mass ejections, the powerful eruptions of plasma and magnetic energy from the Sun's outer atmosphere, or corona.

SECCHI Project Scientist and NRL researcher, Dr. Angelos Vourlidas, explains the significance of this opportunity for the 360-degree view of the Sun, "for the first time, we can take snapshots of the entire atmosphere of a star. To put it in perspective, before STEREO we were like a person trying to get the pulse of a city by watching through a half-open window - not an easy task. Now, STEREO has thrown wide open the window and we can watch the Sun and its activity in its full three-dimensional glory." Each STEREO telescope sees half the Sun at a time. By combining the two views, NRL researchers can map of the entire solar atmosphere continuously.

Before the three-dimensional view was available, researchers had to wait until an active region rotated across the visible-from-Earth disk in order to study the properties. The problem of having to wait for the proper views to appear is that the corona is highly variable, filled with regions that come and go in a matter of days and explosions that can alter the corona landscape in a matter of hours.
With this capability of a three-dimensional view of the Sun, Vourlidas sees the potential for advances in the field of heliophysics. "We can solve the puzzles behind the evolution and structure of the solar atmosphere, including its violent eruptions, because we will be able to observe every feature and source of activity at the same time all over the Sun and follow their connections that can extend to large distances around the Sun," he explains. This opportunity for the STEREO spacecraft to view the Sun in three-dimension will be available for the next eight years.

STEREO is the third mission in NASA's Solar Terrestrial Probes Program. STEREO is sponsored by NASA's Science Mission Directorate, Washington, D.C. The Goddard Science and Exploration Directorate manages the mission, instruments, and science center. The Johns Hopkins University applied Physics Laboratory, Laurel, Md., designed and built the spacecraft and is operating them for NASA during the mission.