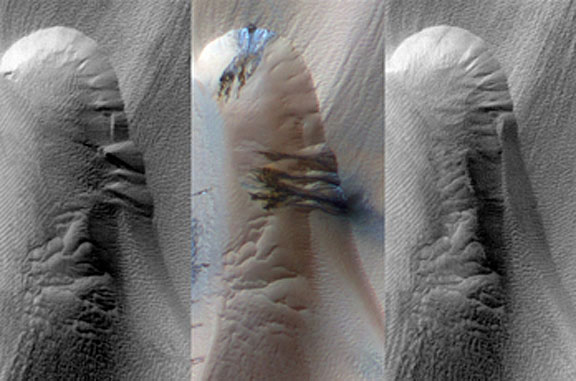 Sand dunes in a vast area of northern Mars long thought to be frozen in time are changing with both sudden and gradual motions, according to research using images from a NASA orbiter.

These dune fields cover an area the size of Texas in a band around the planet at the edge of Mars' north polar cap. The new findings suggest they are among the most active landscapes on Mars. However, few changes in these dark-toned dunes had been detected before a campaign of repeated imaging by the High Resolution Imaging Science Experiment (HiRISE) camera on NASA's Mars Reconnaissance Orbiter, which reached Mars five years ago next month.

Scientists had considered the dunes to be fairly static, shaped long ago when winds on the planet's surface were much stronger than those seen today, said HiRISE Deputy Principal Investigator Candice Hansen of the Planetary Science Institute, Tucson, Ariz. Several sets of before-and-after images from HiRISE over a period covering two Martian years -- four Earth years -- tell a different story.

"The numbers and scale of the changes have been really surprising," said Hansen.

A report by Hansen and co-authors in this week's edition of the journal Science identifies the seasonal coming and going of carbon-dioxide ice as one agent of change, and stronger-than- expected wind gusts as another.

A seasonal layer of frozen carbon dioxide, or dry ice, blankets the region in winter and changes directly back to gaseous form in the spring.

"This gas flow destabilizes the sand on Mars' sand dunes, causing sand avalanches and creating new alcoves, gullies and sand aprons on Martian dunes," she said. "The level of erosion in just one Mars year was really astonishing. In some places, hundreds of cubic yards of sand have avalanched down the face of the dunes."

Wind drives other changes. Especially surprising was the discovery that scars of past sand avalanches could be partially erased by wind in just one Mars year. Models of Mars' atmosphere do not predict wind speeds adequate to lift sand grains, and data from Mars landers show high winds are rare.

In all, modifications were seen in about 40 percent of these far-northern monitoring sites over the two-Mars-year period of the study.

Related HiRISE research previously identified gully-cutting activity in smaller fields of sand dunes covered by seasonal carbon-dioxide ice in Mars' southern hemisphere. A report four months ago showed that those changes coincided with the time of year when ice builds up.

"The role of the carbon-dioxide ice is getting clearer," said Serina Diniega of NASA's Jet Propulsion Laboratory, Pasadena, Calif., lead author of the earlier report and a co-author of the new report. "In the south, we saw before-and-after changes and connected the timing with the carbon-dioxide ice. In the north, we're seeing more of the process of the seasonal changes and adding more evidence linking the changes with the carbon dioxide."

Researchers are using HiRISE to repeatedly photograph dunes at all latitudes, to understand winds in the current climate on Mars. Dunes at latitudes lower than the reach of the seasonal carbon-dioxide ice do not show new gullies. Hansen said, "It's becoming clear that there are very active processes on Mars associated with the seasonal polar caps."

The new findings contribute to efforts to understand what features and landscapes on Mars can be explained by current processes, and which require different environmental conditions.

"Understanding how Mars is changing today is a key first step to understanding basic planetary processes and how Mars changed over time," said HiRISE Principal Investigator Alfred McEwen of the University of Arizona, Tucson, a co-author of both reports. "There's lots of current activity in areas covered by seasonal carbon-dioxide frost, a process we don't see on Earth. It's important to understand the current effects of this unfamiliar process so we don't falsely associate them with different conditions in the past."

The University of Arizona Lunar and Planetary Laboratory operates the HiRISE camera, which was built by Ball Aerospace & Technologies Corp., Boulder, Colo. JPL, a division of the California Institute of Technology in Pasadena, manages the Mars Reconnaissance Orbiter for NASA's Science Mission Directorate in Washington. Lockheed Martin Space Systems, Denver, built the orbiter. For more about the Mars Reconnaissance Orbiter, visit http://www.nasa.gov/mro. For more about HiRISE, visit http://hirise.lpl.arizona.edu .