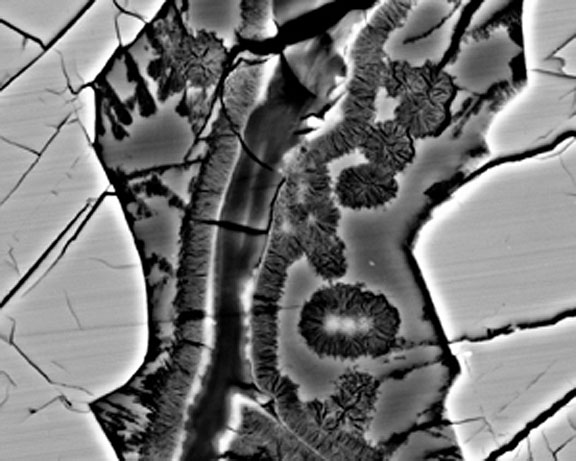 Rare fragments of Martian meteorites have been investigated at the University of Leicester revealing one of the ways water flowed near the surface of Mars. Scientists at the University's renowned Space Research Centre, in the Department of Physics and Astronomy, examined five meteorite samples -- including the very first nakhlite, found a century ago.

Nakhlites are a form of meteorite known to have originated on Mars. They are named after the village of El-Nakhla in Egypt where the first one was found in 1911. Findings from the research have been published in Meteoritics and Planetary Science (Dec. 2010 issue, vol. 45). The research was funded by the U.K. Science and Technology Facilities Council (STFC).

Hitesh Changela and Dr. John Bridges used electron microscopes in the University's Advanced Microscopy Centre to study the structure and composition of five nakhlites, including the 1911 specimen, which is housed in the collections of the Natural History Museum, London. Minute wafers of rock, about 0.1 micron thick, were milled off the meteorites as part of the research.

By comparing the five meteorites, they showed the presence of veins created during an impact on Mars. They suggest that this impact was associated with a 1-10 km diameter crater. Buried ice melted during this impact depositing clay, serpentine, carbonate and a gel deposit in the veins.

This work closely ties in to recent geological discoveries of clay and carbonate on the surface of Mars made by NASA and ESA probes, and shows how some of it probably formed. Serpentine mineralization is associated with the production of methane. It is the purpose of the 2016 Trace Gas Orbiter mission to search for and understand the origin of any methane in the Mars atmosphere as it can be a biomarker. This work shows one of the ways that methane was probably produced.

Dr. Bridges, who is supervising Hitesh's PhD, said, "We are now starting to build a realistic model for how water deposited minerals formed on Mars, showing that impact heating was an important process. The constraints we are establishing about temperature, pH and duration of the hydrothermal action help us to better understand the evolution of the Mars surface. This directly ties in with the current activities of landing site selection for Mars rovers and Mars Sample Return. With models like this we will better understand the areas where we think that water was once present on Mars."

Captions: Image showing a vein through which water has flowed. Credit: University of Leicester

The Natural History Museum, London: Winner of Visit London's 2010 Evening Standard's Peoples Choice Best London for Free Experience Award and Best Family Fun Award the Natural History Museum is also a world-leading science research centre. Through its collections and scientific expertise, the Museum is helping to conserve the extraordinary richness and diversity of the natural world with groundbreaking projects in more than 68 countries.

University of Leicester: A member of the 1994 Group of universities that shares a commitment to research excellence, high quality teaching and an outstanding student experience. http://www2.le.ac.uk/about/facts