SAN FRANCISCO -- NASA's Mars Opportunity rover is getting important tips from an orbiting spacecraft as it explores areas that might hold clues about past Martian environments.

Researchers are using a mineral-mapping instrument aboard NASA's Mars Reconnaissance Orbiter (MRO) to help the rover investigate a large ancient crater called Endeavour. MRO's Compact Reconnaissance Imaging Spectrometer for Mars (CRISM) is providing maps of minerals at Endeavour's rim that are helping the team choose which area to explore first and where to go from there.

As MRO orbits more than 150 miles high, the CRISM instrument provides mapping information for mineral exposures on the surface as small as a tennis court.

"This is the first time mineral detections from orbit are being used in tactical decisions about where to drive on Mars," said Ray Arvidson of Washington University in St. Louis. Arvidson is the deputy principal investigator for the Spirit and Opportunity rovers and a co-investigator for CRISM.

Opportunity's science team chose to begin driving the rover toward the 14-mile-wide crater in 2008, after four years studying other sites in what initially was planned as a three-month mission. The rover has traveled approximately nine miles since setting out for Endeavour crater. It will take several months to reach it.

The team plans for Opportunity's exploration of Endeavour to begin at a rim fragment called Cape York. That feature is too low to be visible by the rover, but appears from orbit to be nearly surrounded by water-bearing minerals. The planned route then turns southward toward a higher rim fragment called Cape Tribulation, where CRISM has detected a class of clay minerals not investigated yet by a ground mission. Spacecraft orbiting Mars found these minerals to be widespread on the planet. The presence of clay minerals at Endeavour suggests an earlier and milder wet environment than the very acidic wet one indicated by previous evidence found by Opportunity.

"We used to have a disconnect between the scale of identifying minerals from orbit and what missions on the surface could examine," said CRISM team member Janice Bishop of NASA's Ames Research Center in Moffett Field, Calif., and the SETI Institute of Mountain View, Calif. Now, rovers are driving farther and orbital footprints are getting smaller." 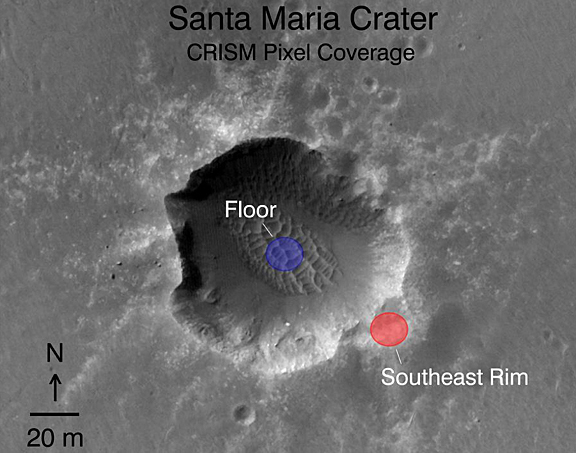 Image: NASA's Mars Exploration Rover Opportunity approached Santa Maria Crater in December 2010. With a diameter of about 90 meters (295 feet), this crater is slightly smaller than Endurance Crater, which Opportunity explored for about half a year in 2004. This image of Santa Maria Crater was taken by the High Resolution Imaging Science Experiment (HiRISE) camera on Mars Reconnaissance Orbiter. The rover team plans to use Opportunity for investigating Santa Maria for a few weeks before resuming the rover's long-term trek toward Endurance Crater. One planned target area is at Santa Maria's southeast rim. The red circle marked there on Figure 1 indicates the pixel size and location of an observation by the Compact Reconnaissance Imaging Spectrometer for Mars (CRISM) on NASA's Mars Reconnaissance Orbiter that has piqued researchers' interest. The spectrum recorded by CRISM for this spot, unlike the spectrum recorded for the place indicated by the blue circle on the floor of the crater, suggests what might be a water-bearing sulfate mineral. Although Opportunity has detected such minerals on the surface during its nearly seven years on Mars, none have been detected from orbit at a place visited by Opportunity. Image Credit: NASA/JPL-Caltech/Univ. of Arizona

Ten years ago, an imaging spectrometer on the Mars Global Surveyor orbiter found an Oklahoma-sized are with a type of the mineral hematite exposed. This discovery motivated selection of the area as Opportunity's 2004 landing site. Each pixel footprint for that spectrometer was two miles across. CRISM resolves areas about 60 feet across. Last fall, the instrument began using a pixel-overlap technique that provided even better resolution.

Opportunity has just reached a 90-meter-diameter (300-foot-diameter) crater called Santa Maria where CRISM detected a patch of ground with indications of water bound into the mineral. Opportunity will conduct a science campaign at the crater for the next several weeks to compare the ground results to the orbital indications.

A Martian year lasts approximately 23 months. During the past Martian year, Opportunity covered more than 7.5 miles of the mission's 16 total miles traveled since it landed in January 2004. The rover has returned more than 141,000 images.

MRO reached the Red Planet in 2006 to begin a two-year primary science mission. Its data show Mars had diverse wet environments at many locations for differing durations during the planet's history, and climate-change cycles persist into the present era. The mission has returned more planetary data than all other Mars missions combined.