Pits, Flows, Other Scenes in New Set of Mars Images

Strewn boulders and rippled sand lie on the floors of two shadowy, steep-walled pits. Mounds in another region appear to be mud volcanoes, which may have brought fine-grained material to the surface from deep underground. In the Tharsis volcanic region, the intersection of a lava flow with a trough caused by ground collapse allows seeing whether the flow happened before or after the collapse.

These and thousands of other images from HiRISE observations between Oct. 1 and Nov. 1, 2010, are now available on NASA's Planetary Data System (http://pds.jpl.nasa.gov/) and the camera team's website (http://hirise.lpl.arizona.edu).

The camera is one of six instruments on NASA's Mars Reconnaissance Orbiter, which reached Mars in 2006. It has made more than 17,000 observations. Each observation covers an area of several square miles on Mars and reveals details as small as desks. 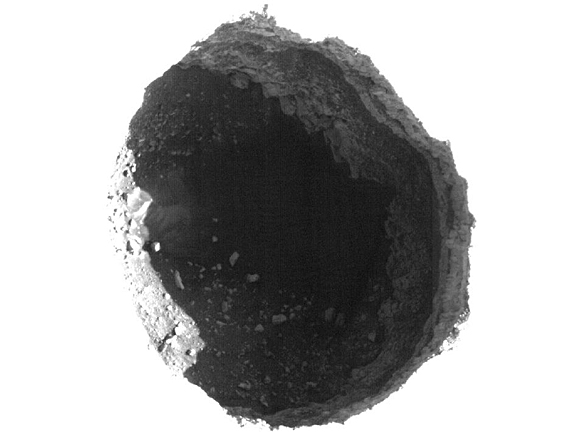 This enhanced image shows the inside of a rimless pit about 310 meters (1,017 feet) in diameter, northwest of the mountain Ascraeus Mons in the northern hemisphere of Mars. The pit has a very steep eastern wall (on the right) and more gently sloped western wall. Shadows and overhangs obscure some of the interior, but this stretched-brightness image shows boulders on the floor.

The image is part of an observation made by the High Resolution Imaging Science Experiment (HiRISE) camera on NASA's Mars Reconnaissance Orbiter on Nov. 1, 2010. The terrain covered in the observation includes two dark pits apparently aligned with larger, degraded depressions. Other image products from this observation are available at http://hirise.lpl.arizona.edu/ESP_019997_1975.

Careful study of the walls and floors of the pits, as well as of the surrounding terrain, will help unravel the complicated series of processes that must have been responsible for their formation and subsequent modification.