Astronomers from the University of Leicester, UK, have seen the signature of a magnetar in 11 gamma-ray bursts (GRBs) observed by the Swift satellite. The team, led by Leicester Professor Paul O'Brien, reported their results today at the GRB 2010 meeting in Annapolis, Maryland. Gamma-ray bursts are the most luminous explosions in the Universe and come in two types: long and short. The standard models for long- and short-duration GRBs involve the core-collapse of a rapidly-rotating massive star and the merger of a compact binary star system respectively. It is usually assumed that a black hole forms immediately, which acts as the GRB power source. But recent evidence from bursts observed with the Swift satellite indicates that in some cases, a rapidly rotating, highly magnetized millisecond pulsar, or magnetar, forms before the system collapses to a black hole.

Magnetars are neutron stars about the size of a city, which spin at hundreds of rotations per second and have enormously strong magnetic fields -- more than a million billion times that of the Earth. When formed magnetars drive a thermal wind outwards, and that plus the strong magnetic field produces the GRB. The rapidly-spinning magnetar is also a powerful source of rotational energy which prevents gravitational collapse to a black hole. If the rotational energy can be extracted it can lead to strong X-ray emission for a short period of time until the magnetar can no longer support itself against gravity. The X-ray emission would then rapidly disappear.

Professor O'Brien said, "A magnetar sounds like an object from science fiction, but they have all the properties required to power a GRB. We have now identified 11 GRBs which display a short-lived emission feature that looks exactly like what we would expect to see from a spinning-down magnetar." 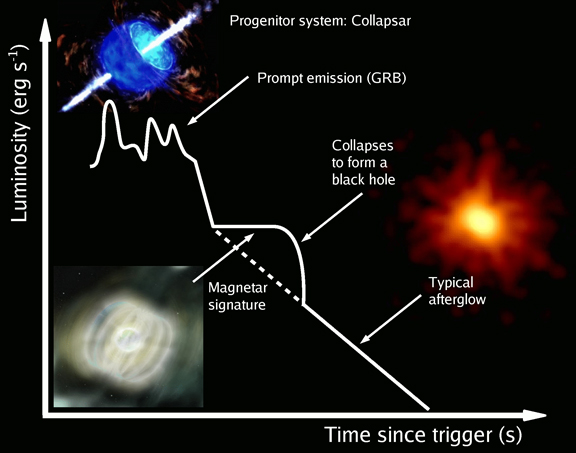 Antonia Rowlinson, lead author of the paper on the short GRB magnetar source, said, "Short-duration GRBs are poorly understood, so our observations provide clear evidence that in some cases you can merge two neutron stars and make an even bigger one which lives for a short period of time before forming a black hole".

The results for both long- and short-duration GRBs have recently been published in papers in Monthly Notices of the Royal Astronomical Society.

The presence of magnetars opens up the possibility to better understand the formation of GRBs and place limits on the available energy reservoir. One exciting prospect is that a multi-stage formation scenario involving collapse to a neutron star followed by collapse to a black hole could result in multiple gravity-wave signals from the same source. These signals may be detectable with the next generation of gravity-wave observatories and would provide the "smoking gun" evidence for GRB formation.

Professor O'Brien said, "At the moment all we know about GRBs comes from electromagnetic light. In future they should be detectable using gravity waves. For the model we propose two signals may be detectable as the neutron star is born and as it dies."

Antonia Rowlinson added, "The gravity-wave signal will be different for a collapsing star and merging neutron star progenitor. The combination of light plus gravity waves would clinch the progenitor type".

A magnetar formed inside a collapsing massive star (magnetar2.jpg). NASA/Swift

Schematic showing the formation of a magnetar due to a massive collapsing star and the resulting X-ray light curve (magnetar_collapsar.gif). Antonia Rowlinson/University of Leicester/NASA/Swift

Schematic showing the formation of a magnetar from a merging binary star system and the resulting X-ray light curve (magnetar_merger.gif). Antonia Rowlinson/University of Leicester/NASA/Swift