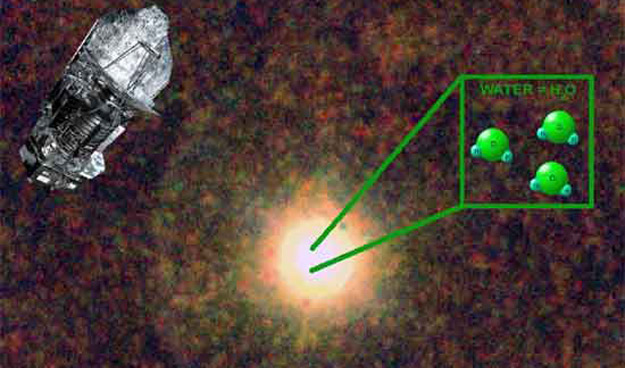 Using the European Herschel space telescope, an international team including astronomers at Observatoire de Paris, Institut de Radio Astronomie Millimetrique and Observatoire de Grenoble in France observed hot water vapor formed somewhere that was previously thought to be impossible: deep into the atmosphere of a red giant pulsating carbon star, CW Leonis. This result, published in the 2 September 2010 issue of Nature magazine, should help to understand how this type of evolved star produces and expels key ingredients for all known forms of life.

The major building blocks of life on Earth are water and carbon-based molecules, synthesized in large quantities by stars like the Sun at the end of their lives. When they age, these stars become red giants and puff out their atmospheres. These have previously been seen to contain either water or carbon-based molecules, and it was thought that these two types of species could not co-exist. New results from the Photodetector Array Camera Spectrometer PACS and Spectral and Photometric Imaging Receiver SPIRE onboard the European Space Agency ESA Herschel observatory, launched in May 2009, have overturned this longstanding concept by detecting abundant hot water vapor in the atmosphere of a very carbon-rich red giant star.

CW Leo (catalogued IRC+10216) is a red giant pulsating star in the constellation of Leo. With a mass roughly similar to that of the Sun, it has expanded to hundreds of times the size of our own star -- if placed in the Solar System it would extend beyond the orbit of Mars. Barely detectable in the visible, even by the largest telescopes, it is the brightest star in the sky observed in the infrared, at wavelengths ten times longer than those seen by human eyes. This suggests that huge quantities of dust particles have condensed around the star. They absorb almost all of its visible radiation and re-emit it in the infrared.

The star is classified as a 'carbon-star' and, at a distance of around 500 light-years, it is the closest such object to Earth. Nuclear fusion reactions deep inside are converting helium into carbon. The star is currently emitting ten thousand times as much energy as the Sun. And its outer layers are billowing out in a 'stellar wind' -- a billion times more intense than the solar wind. This matter is rich in many different carbon based molecules and dust particles. CW Leonis will soon end its life by becoming a hot white dwarf star surrounded by a diffuse planetary nebula -- an extended cloud of gas and dust made up of material presently in its atmosphere and expelled into space afterwards.

With so much carbon in its atmosphere, almost all of the oxygen should be locked up in carbon monoxide CO, say scientists. There should be no water vapor, H2O. However, in 2001 the Submillimeter Wave Astronomy Satellite SWAS detected emission from CW Leonis at a wavelength of water vapor. A possible proposed origin was that the wind was releasing water molecules from a cloud of evaporating icy comets around the star.

However, now, Herschel has detected the definitive signature of water at many more wavelengths. Vapor appears at temperatures of up to 1000 degrees, implying that it is distributed throughout and deep down into the wind. The model of the stellar wind interacting with a distant icy comet cloud must now be replaced by another one in which water vapor is created by previously unsuspected chemical reactions triggered with help from interstellar ultraviolet radiation. Ultraviolet light breaks up the carbon monoxide, releasing oxygen atoms that can then react with hydrogen to form water molecules.

The only possible source of the ultraviolet light is interstellar space. It was already known that the stellar wind is 'clumpy', and the Herschel results have shown that some regions around the star must be almost empty. These allow the ultraviolet light to reach the deepest layers of the atmosphere and initiate chemical reactions to produce water.

On primitive Earth, harsh ultraviolet radiation from the Sun may have played a crucial role in triggering prebiotic processes that ultimately created the molecular building blocks of life. New Herschel results imply that analogous processes operate around red giant stars that supply material for new generations of stars and planets in galaxies like our Milky Way.

This news is based on a scientific paper entitled "Warm water vapour in the sooty ouflow from a luminous carbon star," published on Thursday, 2 September 2010, in Nature.

IRAM is a French, German and Spanish institute supported in France by INSU/CNRS.

Herschel is an ESA observatory. PACS and SPIRE instruments have been developed by a consortium of institutes with support from CEA, CNES, CNRS funding agencies in France.