Flowing lava can carve or build paths very much like the riverbeds and canyons etched by water, and this probably explains at least one of the meandering channels on the surface of Mars. These results were presented on March 4, 2010 at the 41st Lunar and Planetary Science Conference by Jacob Bleacher at NASA's Goddard Space Flight Center, Greenbelt, Md. Whether channels on Mars were formed by water or by lava has been debated for years, and the outcome is thought to influence the likelihood of finding life there.

"To understand if life, as we know it, ever existed on Mars, we need to understand where water is or was," says Bleacher. Geologists think that the water currently on the surface of Mars is either held in the soil or takes the form of ice at the planet's north and south poles. But some researchers contend that water flowed or pooled on the surface sometime in the past; water in this form is thought to increase the chance of some form of past or present life.

One of the lines of support for the idea that water once flowed on Mars comes from images that reveal details resembling the erosion of soil by water: terracing of channel walls, formation of small islands in a channel, hanging channels that dead-end and braided channels that branch off and then reconnect to the main branch. "These are thought to be clear evidence of fluvial [water-based] erosion on Mars," Bleacher says.

Lava is generally not thought to be able to create such finely crafted features. Instead, "the common image is of the big, open channels in Hawaii," he explains. 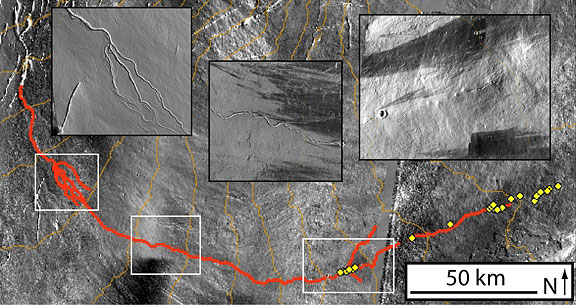 Diagram highlighting areas of presumed lava channels on Mars Details from the Ascraeus channel (red), meandering across the surface of Mars. The insets in the black boxes show close-ups of some of the structures that lava can form: (left) branched channels, (middle) a snaking channel and (right) rootless vents; the rootless vents are also marked by yellow spots on the main image. Credit: Jacob Bleacher Larger image

Bleacher and his colleagues carried out a careful study of a single channel on the southwest flank of Mars' Ascraeus Mons volcano, one of the three clustered volcanoes collectively called the Tharsis Montes. To piece together images covering more than 270 kilometers (~168 miles) of this channel, the team relied on high-resolution pictures from three cameras--the Thermal Emission Imaging System (THEMIS), the Context Imager (CTX) and the High/Super Resolution Stereo Color (HRSC) imager--as well as earlier data from the Mars Orbiter Laser Altimeter (MOLA). These data gave a much more detailed view of the surface than previously available.

Because the fluid that formed this and other Ascraeus Mons channels is long-gone, its identity has been hard to deduce, but the visual clues at the source of the channel seem to point to water. These clues include small islands, secondary channels that branch off and rejoin the main one and eroded bars on the insides of the curves of the channels.

But at the channel's other end, an area not clearly seen before, Bleacher and colleagues found a ridge that appears to have lava flows coming out of it. In some areas, "the channel is actually roofed over, as if it were a lava tube, and lined up along this, we see several rootless vents," or openings where lava is forced out of the tube and creates small structures, he explains. These types of features don't form in water-carved channels, he notes. Bleacher argues that having one end of the channel formed by water and the other end by lava is an "exotic" combination. More likely, he thinks, the entire channel was formed by lava. 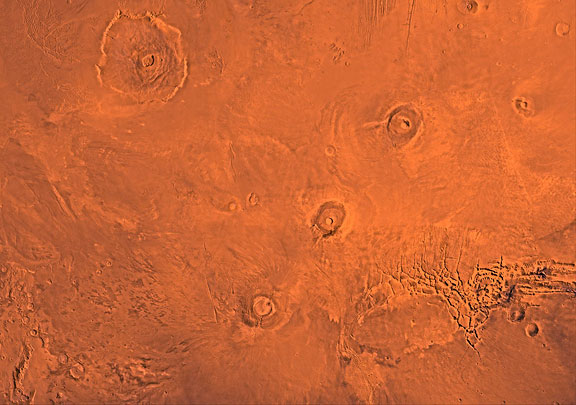 To find out what kinds of features lava can produce, Bleacher, along with W. Brent Garry and Jim Zimbelman at the Smithsonian Institution in Washington, examined the 51-kilometer (~32 mile) lava flow from the 1859 eruption of Mauna Loa on the Big Island of Hawaii. Their main focus was an island nearly a kilometer long in the middle of the channel; Bleacher says this is much larger than islands typically identified within lava flows. To survey the island, the team used differential GPS, which provides location information to within about 3 to 5 centimeters (1.1 to 1.9 inches), rather than the roughly 3 to 5 meters (9.8 to 16.4 feet) that a car's GPS can offer.

"We found terraced walls on the insides of these channels, channels that go out and just disappear, channels that cut back into the main one, and vertical walls 9 meters (~29 feet) high," Bleacher says. "So, right here, in something that we know was formed only by flowing lava, we found most of the features that were considered to be diagnostic of water-carved channels on Mars."

The new results make "a strong case that fluid lava can produce channels that look very much like water-generated features," says Zimbelman. "So, we should not jump to a water-related conclusion when we see such channels on other planets, particularly in volcanic terrain such as that around the Tharsis Montes volcanoes."

Further evidence that such features could be created by lava flows came from the examination of a detailed image of channels from the Mare Imbrium, a dark patch on the moon that is actually a large crater filled with ancient lava rock. In this image, too, the researchers found channels with terraced walls and branching secondary channels.

The conclusion that lava probably made the channel on Mars "not only has implications for the geological evolution of the Ascraeus Mons but also the whole Tharsis Bulge [volcanic region]," says Andy de Wet, a co-author at Franklin & Marshall College, Lancaster, Penn. "It may also have some implications for the supposed widespread involvement of water in the geological evolution of Mars."

Bleacher notes that the team's conclusions do not rule out the possibility of flowing water on Mars, nor of the existence of other channels carved by water. "But one thing I've learned is not to underestimate the way that liquid rock will flow," he says. "It really can produce a lot of things that we might not think it would."

Philip Christensen of Arizona State University is the principal investigator for the THEMIS instrument on the Mars Odyssey orbiter, and Mike Malin of Malin Space Science Systems is the principal investigator for the CTX instrument aboard the Mars Reconnaissance Orbiter. Both missions are managed by NASA's Jet Propulsion Laboratory (JPL), Pasadena, Calif. MOLA was aboard the Mars Global Surveyor, built by JPL. HRSC is aboard the European Space Agency's Mars Express spacecraft.