Since the discovery of its presence in the Martian atmosphere, methane has remained an intriguing atmospheric component which source (either of biotic or abiotic origin) is not yet fully understood. The recently reported variations in the concentration of atmospheric methane have proven difficult to explain with 3-D numerical models of the atmosphere that include the known chemical and physical processes. In a paper published this week in Nature, Franck Lefevre and Francois Forget present their study to derive the implications of the observed methane concentrations on Mars and their variability. They conclude that there needs to be both an intense localised source of methane and a destruction mechanism that is much more efficient than the known atmospheric processes that break down methane. Further, if this efficient destruction of methane occurs only close to the surface, these findings imply a very harsh environment for organic molecules to survive on the surface of Mars.

More information and videos at ESA

The Martian atmosphere is composed mainly of CO2 (95%), with nitrogen and argon forming the largest contributions to the remainder. Methane (CH4) was discovered to be among the other trace components as reported in 2004 from observations by both the PFS instrument on board Mars Express (Formisano et al.) and ground based telescopes (Krasnopolsky et al.). These observations also indicated that the distribution of methane was not uniform across the planet. Varying methane concentrations

More extensive measurements of the methane concentrations have confirmed that the atmospheric methane is not uniformly distributed and revealed local enhancements that also varied with the seasons on Mars (Mumma et al. 2009). This is unexpected, because the current understanding of photochemistry in the Martian atmosphere implies an atmospheric lifetime for methane of more than 300 Earth years, which is long enough for smoothing out any local enhancements by circulation resulting in a global uniform distribution.

Lefevre and Forget use a 3-D global dynamical model of the Martian atmosphere that takes into account the currently known atmospheric (photo-)chemical and physical processes, to study the evolution of the atmospheric methane. With this model the only variation in methane concentrations that they initially find is the known global variation caused by the condensation-sublimation cycle of CO2 - when CO2 is extracted from the atmosphere by condensation at the South Pole during southern winter other atmospheric components are effectively enhanced, including methane.

To try and reproduce the recently observed local enhancement and seasonal variation of methane levels, the authors introduce a local and temporary source of methane at the position of a reported maximum (in Syrtis Major, around 10*N, 50*E). The source is defined to be active for 60 Martian days of the Martian year, during the late northern summer. The total amount of methane that is emitted by the source is limited to match the amount removed from the atmosphere in one Martian year. This depends directly on the atmospheric lifetime of methane. In the consensus model the lifetime is defined by the photochemical reactions in the atmosphere and is over 300 years. Under these conditions, the source was found to be not strong enough to produce any detectable local enhancement of methane (Figure 1).

Simulation of atmospheric methane levels, as derived from a global climate-chemical model of Mars. A local methane source is added in Syrtis Major to try and match the observations of Mumma et al., 2009. (Figures 1a and 2b from F. Lefevre & F. Forget, 2009). 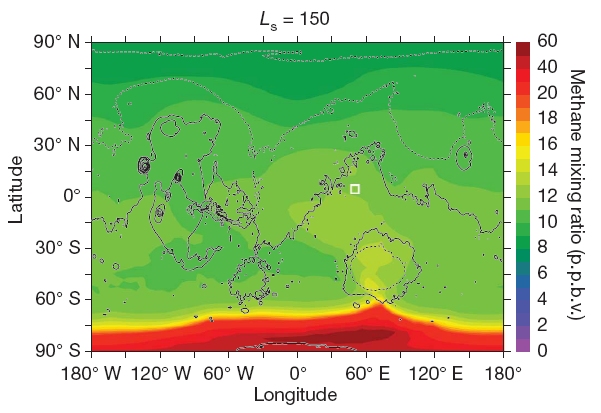 Figure 1. The added local source does not show up when only currently know atmospheric processes are included, which result in an atmospheric lifetime for methane of about 330 Earth years, and allow only a modest strength of the local methane source. 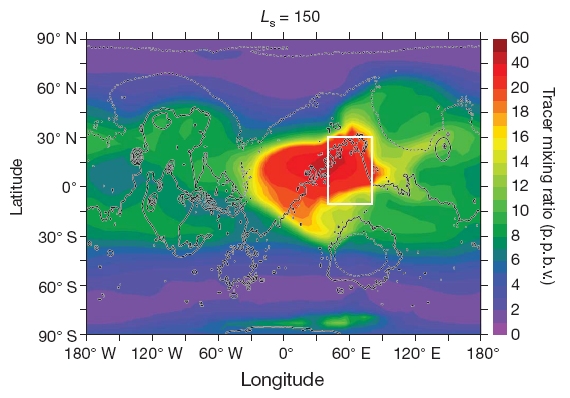 Figure 2. It requires a methane lifetime of just 200 Earth days - and hence an as yet unidentified and more effective process to remove methane from the atmosphere - to obtain local enhancements and variations that match those reported in Mumma et al. 2009.

The authors next ran a set of simulations with varying values for the atmospheric lifetime of methane, differing from the consensus. The total amount of methane produced by the local source was kept equal to the loss in a Martian year determined by the selected lifetime. A shorter lifetime means methane is destroyed faster and therefore requires a stronger source to compensate. Three types of sources were compared: a continuous source and a periodic source that was active for either 60 or 120 Martian days of a Martian year.

The combination of a decrease in the atmospheric lifetime for methane by a factor of ~600 (from >300 Earth years to about 200 Earth days), plus a periodic source 600 times stronger than the one in the consensus model is required to reproduce local enhancement at the reported level in the Syrtis Major region (Figure 2). Short lifetime implies effective sink

The much shorter lifetime implies a very efficient methane destruction mechanism. No currently known atmospheric process that removes methane from the atmosphere is efficient enough to act as a sink with the needed capacity, without leading to conflict with observed values of other atmospheric components. An as yet unidentified process is required. A possibility that the authors discuss is a mechanism in which methane is oxidized at the interface with the Martian soil. Because in this process methane is only destroyed from a limited volume close to the surface the destruction rate, however, needs to be even higher. The derived surface lifetime for methane would be on the order of just 1 hour. If confirmed, this would make the Martian surface an extremely harsh environment for organics to survive.

More information and videos at ESA