An international team of scientists has found that giant exoplanets orbiting very close to their stars could lose a quarter of their mass during their lifetime. The team found that planets that orbit closer than 2% of an Astronomical Unit (AU), the distance between the Earth and the Sun, may lose their atmospheres completely, leaving just their core. The team, led by Dr Helmut Lammer of the Space Research Institute of the Austrian Academy of Sciences, believe that the recently discovered CoRoT-7b "Super Earth", which has less than twice the mass of the Earth, could be the stripped core of a Neptune-sized planet.

The team used computer models to study the possible atmospheric mass loss over a stellar lifecycle for exoplanets at orbiting distances of less than 0.06 AU where the planetary and stellar parameters are very well known from observations. The 49 planets considered in the study included hot gas giants, planets with masses similar or greater than that of Saturn and Jupiter, and hot ice giants, planets comparable to Uranus or Neptune. All the exoplanets in the sample were discovered using the transit method, where the size and mass of the planet is deduced by observing how much its parent star dims as it the planet passes in front of it.

"If the transit data are accurate, these results have great relevance for planetary formation theories", said Dr Lammer, who is presenting results at the European Week of Astronomy and Space Science at the University of Hertfordshire. 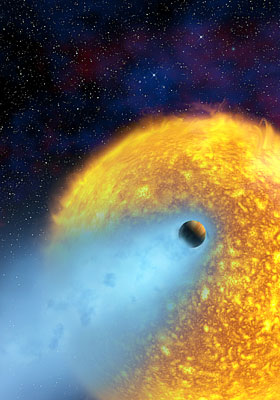 This artist's impression shows a dramatic close-up of the scorched extrasolar planet HD 209458b in its orbit 'only' 7 million kilometres from its yellow Sun-like star. The planet is a type of extrasolar planet known as a 'hot Jupiter'. Using the NASA/ESA Hubble Space Telescope, for the first time, astronomers have observed the atmosphere of an extrasolar planet evaporating off into space (shown in blue in this illustration). Much of this planet may eventually disappear, leaving only a dense core. Astronomers estimate the amount of hydrogen gas escaping HD 209458b to be at least 10 000 tonnes per second, but possibly much more. The planet may therefore already have lost quite a lot of its mass.

"We found that the Jupiter-type gas giant WASP-12b may have lost around 20-25% of its mass over its lifetime, but that other exoplanets in our sample had negligible mass loss. Our model shows also that one major important effect is the balance between the pressure from the electrically charged layer of the planet's atmosphere and the pressure from the stellar wind and coronal mass ejections (CMEs). At orbits closer than 0.02 AU, the CMEs -- violent explosions from the star’s outer layers -- overwhelm the exoplanet's atmospheric pressure causing it to lose maybe several tens of percent of its initial mass during its lifetime."

The team found that gas giants could evaporate down to their core size if they orbit closer than 0.015 AU. Lower-density ice giants could completely lose their hydrogen envelope at 0.045 AU. Gas giants orbiting at more than 0.02 AU lost about 5-7% of their mass. Other exoplanets lost less than 2&. Results suggest that CoRoT-7b could be an evaporated Neptune-like planet but not the core of a larger gas giant. Model simulations indicate that larger mass gas giants could not have been evaporated to the mass range determined for CoRoT-7b.