PASADENA, Calif. -- There is more than one way to make a dwarf galaxy, and NASA's Galaxy Evolution Explorer has found a new recipe. The spacecraft has, for the first time, identified dwarf galaxies forming out of nothing more than pristine gas likely leftover from the early universe. Dwarf galaxies are relatively small collections of stars that often orbit around larger galaxies like our Milky Way.

The findings surprised astronomers because most galaxies form in association with a mysterious substance called dark matter or out of gas containing metals. The infant galaxies spotted by the Galaxy Evolution Explorer are springing up out of gas that lacks both dark matter and metals. Though never seen before, this new type of dwarf galaxy may be common throughout the more distant and early universe, when pristine gas was more pervasive.

Astronomers spotted the unexpected new galaxies forming inside the Leo Ring, a huge cloud of hydrogen and helium that traces a ragged path around two massive galaxies in the constellation Leo. The cloud is thought likely to be a primordial object, an ancient remnant of material that has remained relatively unchanged since the very earliest days of the universe. Identified about 25 years ago by radio waves, the ring cannot be seen in visible light.

"This intriguing object has been studied for decades with world-class telescopes operating at radio and optical wavelengths," said David Thilker of Johns Hopkins University, Baltimore, Md. "Despite such effort, nothing except the gas was detected. No stars at all, young or old, were found. But when we looked at the ring with the Galaxy Evolution Explorer, which is remarkably sensitive to ultraviolet light, we saw telltale evidence of recent massive star formation. It was really unexpected. We are witnessing galaxies forming out of a cloud of primordial gas." 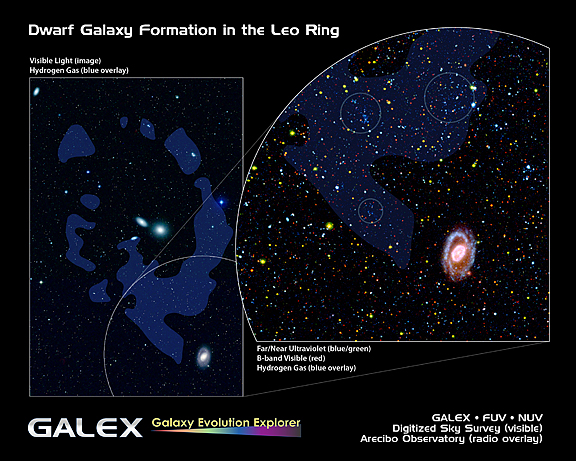 In a recent study, Thilker and his colleagues found the ultraviolet signature of young stars emanating from several clumps of gas within the Leo Ring. "We speculate that these young stellar complexes are dwarf galaxies, although, as previously shown by radio astronomers, the gaseous clumps forming these galaxies lack dark matter," he said. "Almost all other galaxies we know are dominated by dark matter, which acted as a seed for the collection of their luminous components--stars, gas and dust. What we see occurring in the Leo Ring is a new mode for the formation of dwarf galaxies in material remaining from the much earlier assembly of this galaxy group."

Tidal dwarf galaxies condense out of gas recycled from other galaxies and have been separated from most of the dark matter with which they were originally associated. They are produced when galaxies collide and their gravitational masses interact. In the violence of the encounter, streamers of galactic material are pulled out away from the parent galaxies and the halos of dark matter that surround them.

Because they lack dark matter, the new galaxies observed in the Leo Ring resemble tidal dwarf galaxies, but they differ in a fundamental way. The gaseous material making up tidal dwarfs has already been cycled through a galaxy. It has been enriched with metals--elements heavier than helium-- produced as stars evolve. "Leo Ring dwarfs are made of much more pristine material without metals," said Thilker. "This discovery allows us to study the star formation process in gas that has not yet been enriched."

Large, pristine clouds similar to the Leo Ring may have been more common throughout the early universe, Thilker said, and consequently may have produced many dark-matter-lacking, dwarf galaxies yet to be discovered.

The results of the new study reporting star formation in the Leo Ring appear in the February 19, 2009, issue of the journal Nature.

Caltech leads the Galaxy Evolution Explorer mission and is responsible for science operations and data analysis. NASA's Jet Propulsion Laboratory, Pasadena, Calif., manages the mission and built the science instrument. The mission was developed under NASA's Explorers Program managed by the Goddard Space Flight Center, Greenbelt, Md. South Korea and France are the international partners in the mission.