Most people might think that finding water on the moon would be as impractical as locating green cheese there. But as unlikely as it might seem, water may well exist on our nearest neighbor in space. Both the Clementine (in 1994) and the Lunar Prospector (in 1998) spacecraft found indirect -- but not rock-solid -- evidence that water ice may be in the dark shadows of craters in the lunar south pole area – gloomy places that never see the light of day.

These permanently shadowed craters are ideal spots for ice to exist in the extreme cold. As part of the Vision for Space Exploration, the United States has plans to send astronauts back to the moon by 2018 to establish bases there. One good place to build a base might be in an area where water ice could be mined. Scientists think there might be enough of this precious water to provide astronauts with drinking water.

During the Lunar Prospector mission in 1998, scientists estimated that as much as 6 billion metric tons of water ice could be under about 18 inches of lunar soil in the craters. Astronauts could even break down the water into hydrogen and oxygen to make rocket fuel.

So, it is no surprise that NASA has begun work to launch a spacecraft to the moon to look for solid evidence of water ice – potentially a very valuable commodity there. Scientists currently reckon it would cost more than $10,000 per pound (0.45 kilogram) to launch material, such as water, to the moon. To lift an ounce (28.35 grams) of water from the Earth to the moon would cost at least $625. If you have lugged a bucket of water, you know how heavy even a small amount of water can be. 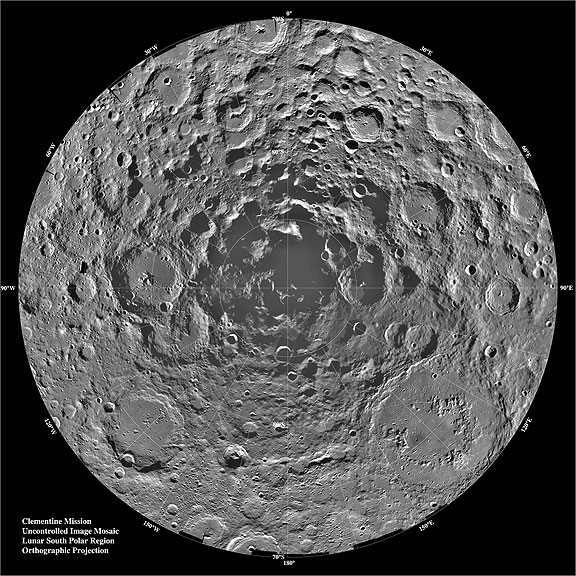 To kick off the quest for lunar water ice, NASA announced April 10 that a small, 'secondary payload' spacecraft, to be developed by a team at NASA Ames Research Center, Moffett Field, Calif., would begin a trip to the moon in October 2008 to look for precious water.

The water-seeking spacecraft is called the Lunar CRater Observation and Sensing Satellite (LCROSS). It is known as a 'secondary payload spacecraft' because it will begin its trip to the moon on the same rocket as the Lunar Reconnaissance Orbiter (LRO), which is on a different mission to the moon. The rocket, the Evolved Expendable Launch Vehicle (EELV), will launch from Kennedy Space Center, Florida.

"We think we have assembled a very creative, highly innovative mission, turning the upper stage of the rocket that brought us to the moon into a substantial impactor on the moon," said Daniel Andrews of NASA Ames, whose team proposed the LCROSS mission.

The LCROSS spacecraft will arrive in the lunar vicinity independent of the LRO satellite. Prior to impacting the moon, LCROSS will orbit Earth twice for about 80 days, and then will strike the lunar south pole in January 2009.

On the way to the moon, the LCROSS spacecraft's two main parts, the Shepherding Spacecraft (S-S/C) and the Earth Departure Upper Stage (EDUS), will remain coupled.

As the spacecraft approaches the moon's south pole, the upper stage will separate, and then will impact a crater in the south pole area. A plume from the upper stage crash will develop as the Shepherding Spacecraft heads in toward the moon.

"The strategy is not to go there and dig it up, but, we're lifting it by means of an impact and bringing it to the spacecraft in a huge cloud," said Tony Colaprete, LCROSS principal investigator, and a planetary scientist at NASA Ames.

The Shepherding Spacecraft will fly through the plume, and instruments on the spacecraft will analyze the cloud to look for signs of water and other compounds. Additional space and Earth-based instruments also will study the 2.2-million-pound (1000-metric-ton) plume.

The Shepherding Spacecraft will have six cameras and two spectrometers. "The instruments are capable of telling us whether there is water in the plume, either in the form of vapor or ice," Colaprete explained. "We'll be able to measure water down to a tenth of a percent of the total mass of the cloud."

"We will have two cameras that can see both visible and ultraviolet (UV) light," Colaprete said. "The cameras will document the growth of the shape of the cloud, and they will also measure UV light emitted by excited water molecules. So, these cameras are capable of detecting water, too."

"Then there are four other cameras that will look at infrared light, which is not visible to human beings," he added. "These cameras will tell us how the temperature of the cloud changes over time. This is important because the water would affect the temperature of the cloud. Therefore, these infrared cameras indirectly will be able to detect water."

The four infrared cameras also will give scientists measurements of what minerals are in the cloud, which researchers can compare to samples collected on the surface of the moon in the equatorial regions during the Apollo missions of 1969 through the early 1970s.

"We'll be able to distinguish between water vapor, water ice, and hydrated minerals like salts or clays that contain molecularly bound water," Colaprete said. "We'll be able to compare the moon dirt from the permanently shadowed regions of craters at the lunar south pole with moon soil samples collected during the Apollo missions at much lower latitudes, near the equator. The stuff inside the dark craters of the south pole may well be different from what we found during Apollo," Colaprete observed.

Then the Shepherding Spacecraft itself will become an impactor, creating a second plume visible to lunar-orbiting spacecraft and Earth-based observatories. If water ice exists in clumps only in certain areas within the targeted crater, the upper stage impactor could miss an icy area, scientists note. The second plume will give scientists a second chance to look for water ice, according to researchers.

"We've talked about water as a resource, but also these water measurements are scientifically significant. We want to understand how the water got there and what its state is -- water ice or hydrated minerals -- such as clays or salt where water is chemically bound to a mineral," Colaprete noted.

The information gathered by LCROSS will give scientists insight into the processes that took place during the formation of the early solar system. "For example, if this water was emplaced by comets, it was probably done billions of years ago," Colaprete said. "Or, if it's implanted by hydrogen in the solar wind that comes from the sun, then that could be a process that continues today."

Solar wind is a fast outflow of hot gas in all directions from the upper atmosphere of the sun. The composition of solar wind matches that of the sun's atmosphere (mostly hydrogen) and its typical velocity is 400 km/sec, covering the distance from sun to Earth in four to five days.

According to Colaprete, Mercury, which is at least 801 degrees Fahrenheit (427 degrees Celsius) in the sunlit areas and is the planet closest to the sun, may well have ice in permanently shadowed craters, similar to those of the moon.

"The point is that this water is indicative of processes that may be common across all bodies in the inner solar system," Colaprete observed. "The moon is a fossil record of the solar system. Understanding about the water at its poles is to understand the nature of the early solar system. The earth is loaded with water, and it might have come from comets, according to some scientists."

In addition to the instruments on the Shepherding Spacecraft that will observe the impact up close and personal, the LRO satellite will be able to observe the fresh LCROSS impact craters with multiple instruments. They may be able to see remnant water ice in the fresh material lying around the new craters formed by the impact of spacecraft.

Water vapor from ice changing directly into water vapor will remain encircling the moon from hours to as long as days. This water is said to be 'exo-sphered', according to Colaprete, and will be observable by LRO satellite as well as ground-based telescopes. LRO will carry advanced sensors that can detect water in at least four different ways.

For images related to the LCROSS mission, please visit:

For information about the Clementine mission to the moon, please see:

To read a fact sheet about the Lunar Prospector mission, please visit: