The U.S. Air Force would be able to launch satellites or deliver special purpose payloads in as little as 48 hours using a new, rapid-turnaround launch system proposed by Northrop Grumman Corporation. The new concept, called a Hybrid Launch Vehicle (HLV), would also reduce launch costs by approximately two-thirds compared to the cost of using a medium evolved expendable launch vehicle.

Photos accompanying this release are available at: http://media.primezone.com/noc/

The HLV derives its name and operational benefits from the fact that it combines a reusable, airplane-like first stage with expendable upper stages. Launched vertically, the vehicle's winged first stage boosts the upper stages to speeds approaching seven times the speed of sound (Mach 7) before releasing them at an altitude of approximately 150,000 feet.

The upper stages then boost the satellite payload to orbit or deliver a conventional weapon to a distant target. Meanwhile, the first stage flies back and lands at its home base like an autonomous, unmanned aircraft. The first stage of the HLV will use a rocket engine during the boost portion of its mission, and an integrated set of air-breathing jet engines for its return flight.

``The reusable nature of the first stage reduces the cost of producing, testing and storing new hardware for each flight,'' adds Poulos. ``It also allows the launch vehicle to be inspected in a hangar like an aircraft, 'mated' with a new upper stage and returned to the launch pad in about 48 hours or less.''

Northrop Grumman is defining the architecture for an operational version of this hybrid launch system under a 20-month, $3.0 million studies and analysis contract with the Air Force's Space & Missile Systems Center, Los Angeles Air Force Base. The contract includes a base amount of $1.5 million over 14 months, with an option for an additional $1.5 million over an additional six months.

Under the contract, the company will also define a concept for a subscale demonstrator version of the launch system, and the infrastructure required to execute a demonstration program. The subscale launch system, if developed, would be used to demonstrate the technologies, processes and key attributes of an operational system.

The current studies and analysis contract is the first step in a process that could lead ultimately to the selection of two contractor teams to develop preliminary designs for the HLV. At the end of the design competition, the Air Force may select a single contractor team to develop and produce the HLV - Subscale Demonstration system.

As envisioned, the HLV system would include both ``operational system-medium lift'' and ``heavy lift'' configurations. Both configurations will be designed to lift payloads into conventional low-Earth orbit, polar low-Earth orbit or a geosynchronous transfer orbit depending on the mission. The Air Force has set threshold payload requirements and ``objective'' or desired payload requirements for each type of orbit. As part of its current contract, the Northrop Grumman team will analyze the relative costs to lift different size payloads, then base its operational system architecture on the HLV design that offers the Air Force the best value.

A geosynchronous transfer orbit is an orbit used to transfer a satellite from low-Earth orbit to a geosynchronous orbit with the aid of a propulsion system that helps ``circularize'' the final orbit.

Northrop Grumman's HLV contract builds on work the company has previously done to help the Air Force identify and mitigate the technical challenges associated with developing and deploying an operationally responsive space vehicle. Under the service's Reusable Access to Space Technology (RAST) program, for example, the company proposed a vertically launched, two-stage-to-orbit space vehicle with a reusable first stage. With its HLV concept, the company expects to further reduce the costs of providing the Air Force with quick-turnaround launch capability. 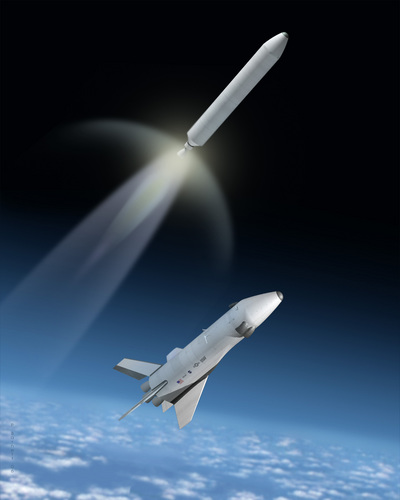 Northrop Grumman is developing concepts for a rapid-turnaround launch system that combines a reusable first stage with expendable second stages. This hybrid launch vehicle would allow the U.S. Air Force to launch satellites or deliver special purpose payloads in as little as 48 hours after receiving a request for support. It would also reduce launch costs by approximately two thirds compared to using a medium evolved expendable launch vehicle. 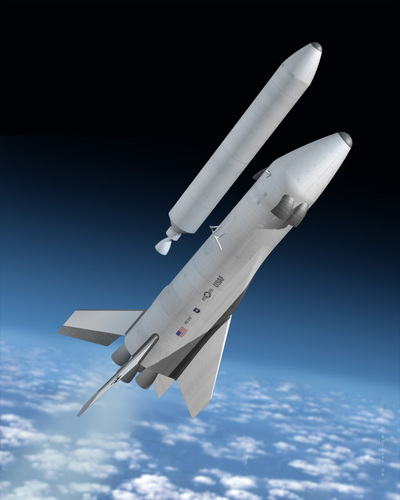 Northrop Grumman is addressing U.S. Air Force requirements for responsive space access by developing a rapid-turnaround launch system that combines a reusable first stage with expendable upper stages. Launched vertically, the hybrid launch vehicle's winged first stage boosts the upper stages to speeds approaching Mach 7 before releasing them at an altitude of approximately 150,000 feet. The first stage then flies back to its home based like an unmanned aerial vehicle.