Strong darkening observed around the equator of Vega suggests that the fifth brightest star in Earth's sky has a huge temperature difference of 4,000 degrees Fahrenheit from its cool equatorial region to its hot poles.

Models of the star based on these observations suggest that Vega is rotating at 92 percent of the angular velocity that would cause it to physically break apart, an international team of astronomers announced today in Washington, DC, at the 207th meeting of the American Astronomical Society.

This result confirms the idea that very rapidly rotating stars are cooler at their equators and hotter at their poles, and it indicates that the dusty debris disk known to exist around Vega is significantly less illuminated by the star's light than previously recognized. 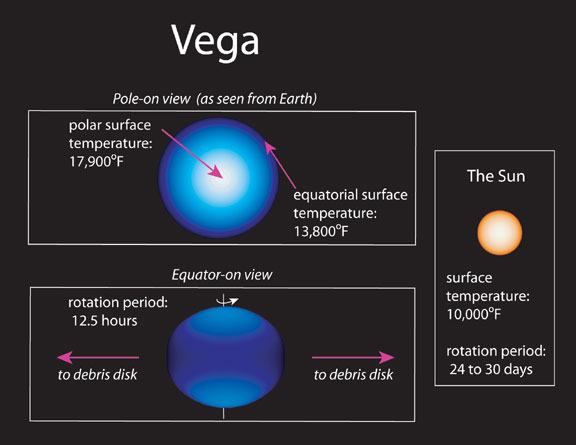 "These findings are significant because they resolve some confusing measurements of the star, and they should help us gain a much better understanding of Vega's circumstellar debris disk," says Jason P. Aufdenberg, the Michelson Postdoctoral Fellow at the National Optical Astronomy Observatory in Tucson, Arizona.

This debris disk arises mainly from the collision of rocky asteroid-like bodies. "The spectrum of Vega as viewed from its equatorial plane, the same plane as the debris disk, should be about half as luminous as the spectrum viewed from the pole, based on these new results," Aufdenberg explains.

With a maximum baseline of 330 meters (1,083 feet), the CHARA Array is capable of resolving details as small as 200 micro-arcseconds, equivalent to the angular size of a nickel seen from a distance of 10,000 miles. The CHARA Array fed the starlight of Vega to the Fiber Linked Unit for Optical Recombination (FLUOR) instrument, developed by the Laboratoire d'Etudes Spatiales et d'Instrumentation en Astrophysique of the Observatoire de Paris.

One major consequence of Vega's rapid rotation is a significant drop in the effective atmospheric temperature by approximately 2,300 Kelvin (4,000 degrees Fahrenheit) from the pole to the equator. This effect, known as "gravity darkening," was first predicted by theoretical astronomer E. Hugo von Zeipel in 1924.

The CHARA/FLUOR measurements of the brightness distribution of Vega's surface also show it to be strongly "limb darkened." Limb darkening refers to the diminishing brightness in the image of a star from the center of the image to the edge or "limb" of the image.

The new measurements are consistent with the "pole-on" model for Vega first proposed by Richard O. Gray of Appalachian State University, which proposes that Vega's pole of rotation points toward Earth. The pole-on view of Vega means that the relatively cool equator corresponds to the limb of the star, such that the gravity-darkening effect further enhances the limb-darkening effect.

The CHARA/FLUOR data support the pole-on, gravity darkened model for Vega by showing that Vega's limb darkening is 2.5 times stronger at a wavelength of 2.2 microns than expected for a star with a single effective atmosphere temperature. Archival observations from the International Ultraviolet Explorer indicate that this model for Vega is not complete. At far ultraviolet wavelengths, below 140 nanometers, the model is generally too bright.

Located at a distance of 25 light-years from Earth in the constellation Lyra, Vega rotates about its axis once every 12.5 hours. For comparison, the Sun's average rotation period is approximately 27 Earth days. Vega is about 2.5 times more massive than the Sun, and 54 times brighter.

At Vega's rapid rate of rotation, the star's atmosphere is distorted, bulging 23 percent wider at its equator compared to its poles. This type of rotational distortion can be seen in images of the planet Saturn, where the planet's equatorial diameter is roughly 10 percent wider than the polar diameter. A direct measurement of Vega's rotational distortion is hidden by its pole-on appearance. However, the accurate angular diameter and darkening measured by CHARA/FLUOR are consistent with this distortion.

These results build upon recent measurements of Vega obtained by a team lead by Deane M. Peterson of the State University of New York, Stony Brook, using the Navy Prototype Optical Interferometer.

A color graphic to illustrate this result is available at      http://www.noao.edu/outreach/press/pr06/pr0603.html#images

This work was performed in part under contract with the Jet Propulsion Laboratory (JPL) funded by NASA through the Michelson Fellowship Program. JPL is managed for NASA by the California Institute of Technology. The CHARA Array is operated by the Center for High Angular Resolution Astronomy, Georgia State University, Atlanta, GA. Additional support comes from the National Science Foundation, the Keck Foundation and the Packard Foundation.

The National Optical Astronomy Observatory is operated by the Association of Universities for Research in Astronomy Inc. (AURA), under a cooperative agreement with the NSF.