The presence of a common green mineral on Mars suggests that the red planet could have been cold and dry since the mineral has been exposed, which may be more than a billion years according to new research appearing in the Oct. 24 edition of Science.

Todd Hoefen, a U.S. Geological Survey (USGS) geophysicist, led a team of researchers from USGS, Arizona State University and NASA, that found abundant quantities of olivine on Mars. They based their conclusions on data obtained from a Thermal Emission Spectrometer (TES) carried by the Mars Global Surveyor (MGS). 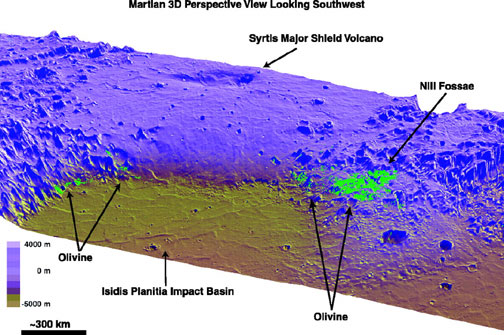 Olivine, a transparent green-colored mineral found in many mafic rocks, is susceptible to chemical weathering and readily alters to other minerals such as iddingsite, goethite, serpentine, chlorite, smectite, maghemite and hematite in the presence of water. Except for trace amounts of hematite, which gives Mars its red color, none of these other weathering products have been found.

The team detected a 30,000 square kilometer area rich in olivine, in the Nili Fossae region of Mars. Nili Fossae has been interpreted as a complex of grabens and fractures related to the formation of the Isidis impact basin, where post-impact faulting exposed the abundant olivine. They have also found smaller deposits of olivine all over the planet, all indicating a surface dominated by volcanic processes. 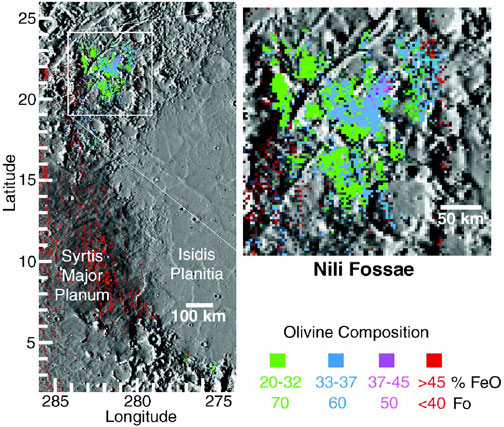 The fact that so much olivine is exposed at the surface indicates that there has been little to no weathering due to water, thus no liquid water-mineral chemical reactions. The age of the surface is somewhat uncertain but is probably over 3 billion years old.

It took approximately three years for the MGS spacecraft and the TES instrument to gather the data for the analysis, and scientists another year to analyze the results. The MGS spacecraft is healthy and continues to map Mars.